Yes, we did go see Captain Phillips even though neither of us really wanted to. However! It was making a special appearance at the cheap theater, so we both got in for less than the cost of even one matinee-priced ticket at the normal theater. No, I'm not sure it was even worth that much. 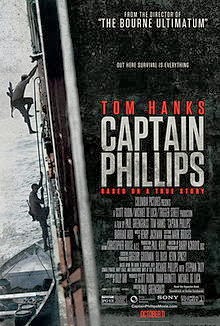 The question I kept asking myself as I was watching the movie and have continued to ask since seeing the movie is "Why did this need to be a movie?" My wife says it's because we need to have movies each year that feature the American military as the good guys, but I'm just not quite buying it. I mean, that's probably true, but it just doesn't do it for me.

Yes, there will be spoilers. Not like everyone doesn't already know how this turns out.

There are a few interesting parts in the movie, but they're not enough to give the movie any real depth. For instance, the movie opens with a scene of Phillips readying himself for his trip. [It's actually the kind of thing I routinely tell my creative writing class not to do: Do not give us your character waking up in the morning, brushing his teeth and eating breakfast. We don't care. Unless there actually is some relevance to the story. Not that that is what see with Phillips, but it's the same kind of thing, but it does have a point.] It's completely normal and middle class, him going off to the airport. I have to say, though, that the dialogue between Phillips and his wife is terrible. It switches, then, to the character of Muse and how his day starts. It serves to show us how very different these two characters are and, yet, how they are similar. So, yeah, that was interesting, but that's the first 10 minutes or so and nothing's that interesting the rest of the movie.

The whole movie can be boiled down to one conversation between Phillips and Muse:
Phillips: There has to be something more than fishing and kidnapping people.
Muse: Maybe in America. Maybe in America.

I think that moment is so short that it gets lost in the rest of the movie. And the movie does nothing to support it, since it focuses on Phillips and not what drove the pirates to do what they do.

The thing I was most struck with, though, is not something I think I was meant to think about:
The pirates were trying to ransom Phillips for $10 million. In response, we mounted a huge Naval engagement which included airdropping in a bunch of SEALs and an aircraft carrier. The recovery mission took days. I'm sure the cost of the rescue mission dwarfed the 10 million the pirates wanted. I'm not saying we should have paid them off, because I don't that at all. I do think there has to be a better way, though. [And because I was curious, the cost to operate an aircraft carrier per day is $7 million! And it was one of only three Navy ships involved in the mission. The mission which lasted several days. So, yeah, we spent WAY more than $10 million to get Phillips back.]

As for the acting, I was unimpressed. Hanks showed up and was appropriately stoic through most of the film. The only real acting he did was at the very end after he was rescued, at which point he has a complete meltdown. That scene with him was great, but the rest of the movie was pretty flat. His acting, all the acting, the whole movie. Let's just say that, overall, I was particularly underwhelmed. It was kind of like watching the "high speed" chase of O.J. Simpson on TV a couple of decades ago. Oh, except for the brief moment where I thought the movie was about to become Home Alone as the crew did things like spread broken glass on the floor for the barefoot pirates to step on. But that didn't last long enough to be engaging.

Basically, the movie gets a "meh" from me. It wasn't stupid (which, you know, would have been pretty bad considering it's based on true events), but it also just didn't do anything for me. I never cared about any of the people involved except for brief moments for the "pirate" kid that stepped on the glass; he was only 15-ish. But, then, Muse was only 16-ish (which never comes out in the movie. If they'd highlighted that, there may have been some emotional investment, but, then, it might have been invested in the "bad" guys). This just isn't an Oscar caliber movie. It's better than The Wolf of Wall Street but not by much. It is, however, politically correct, I would suppose.
Posted by Andrew Leon at 9:36 PM