On Sunday mornings after my wife and I have disposed of... um... I mean, deposited, yes, deposited our kids at their grandparents' house, we go to our favorite cafe. This cafe, which is completely superfluous to this post, serves something (which I am almost positive I've mentioned before) called an Aztec mocha, which is spicy. And awesome. But, as I said, it doesn't pertain to this. After receiving our hot beverages, we often go walking through Railroad Square and look in the windows of the shops. Some would call this window shopping, but, for myself at least, this is not what we're doing. [I just want to point out that our excursions almost only include looking in windows because of the Sunday morning thing and the shops not being open yet. Not that we are often inclined to go inside anyway.]

One of the shops is an antique store which is actually less of an antique store and more of a loose network of people that operate out of one location and sell old junk, some of which happens to be antiques, some of which happens to be collectibles (like vintage Star Wars figures and "old" comic books), but most of which is probably junk you'd find in a yard sale. Still, it's fun to wander through  the place from time to time because interesting things do turn up.

Somewhere around a year ago, they had a window display of what I'm calling "found art." [After looking that up, I'm seeing that the more common terminology is "trash art" or "junk art," but I don't like either of those terms, so I'm going with "found art."] The objects were made up of "found" items that were put together to create artistic pieces, some of which had a very steampunk feel to them. [And, yeah, after last weeks post about Wunderkammer, I'm sure you're all thinking that I'm so big steampunk fan, but, really, I'm not.] And here's the problem with always being around before the store was open: we kept intending to find out more about the artist, but the store was closed, so we never did, and the month ended and the display went away.

Then we intended for a long time to try to find out where we could find the artist's work, but we were never down there late enough for the doors to be open, and, eventually, we stopped reminding ourselves. At least, we quit reminding ourselves often enough to do anything about it. And, so, basically, a year went by, and we never followed up. But, THEN, one morning rather recently, we were actually down there late enough for the antique store to be open AND we remembered to go in and ask.

Now that's a difficult conversation to start, let me tell you: "About a year ago, you guys had a window display..." >blank stare< Hmm... Eventually, we got through that conversation to find out that the woman we were talking to only vaguely remembered that window and, also, vaguely thought the artist (who used to be part of the group that sold out of the antique store) had opened her own store, but, really, we'd need to come back and talk to someone else.

Because, you know, we'd been so successful the first time at remembering to do that.

But we did, actually, remember to go back within a couple of weeks and the person we talked to the second time knew exactly whom we were talking about and, yes, she had opened her own store in the neighboring town of Sebastopol. Now, having been a year or more since we had seen this window display, we just assumed that the woman meant that this other shop had been open for a while, but, when we drove over, we found out that, actually, her new store had only opened just a couple of days before, so, if we had found out what we needed on that first trip, there wouldn't have been a store to go to. How's that serendipity for you?

The shop is called Vintage Revivals. I went by there and picked up a pair of earrings 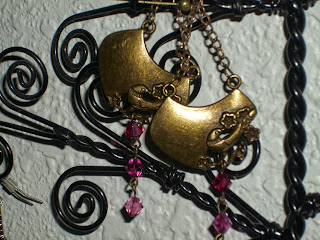 for my wife for her birthday. They can also make custom pieces, so there may be some of that coming in the future as there is a style they do that both of us really like, but more about that next time. 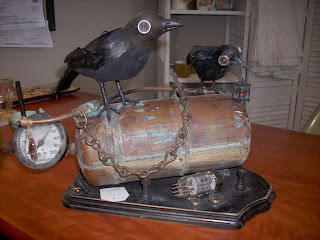 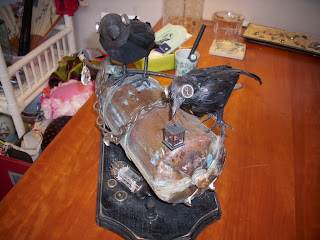