I've made no secret of my general dislike of "starting in the middle of the action" as a way to begin stories. Usually, "starting in the middle of the action" is just a cover for a weak beginning (at least "weak" in the eyes of some TV producer (because it's TV where we find this most often used)) and, after starting as near to the climax as possible, we get the inevitable "48 hours earlier." I just hate that. Seriously. Ask my wife. Any show that uses that tactic as a regular opener holds no real credibility for me. [Only very occasionally does this work for me, like that episode of Firefly that opens with Mal naked and stranded. However, if you're about to show me your characters handcuffed to pipe in a room filling with water for the 7th time this season, please, just don't.]

There are ways of starting a story in media res that do work. For instance, A New Hope opens with a prologue scene of of the battle above Tatooine in which Leia is captured and the droids escape to the planet. The actual exposition of the story does not begin until we switch to the introduction of Luke. That kind of thing works. It gives us background while immediately hooking us. Imagine that story starting in the trash compactor, though, and, then, flashing back to the events leading up to that. That would be horrible. Harry Potter opens the same way, by the way, with a prologue of the baby being taken to the Dursleys; the exposition begins when we switch to about to have a birthday Harry. [I think I read somewhere that Rowling actually wrote that first bit as a prologue, but the publisher made her shift it to "chapter one."]

Another way to start a story in the middle of the action is to open with a character who doesn't know what's going on. For whatever reason. Part of the point of these types of stories is to go along with the character and figure out what's happening and why. Rusty Carl does a pretty great job of that in "My Killbot Buddy." 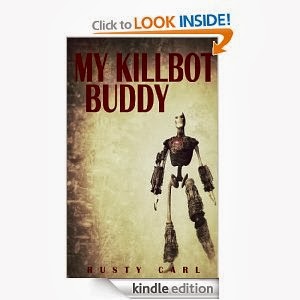 [And, man, that's one killer (no pun intended) cover Rusty whipped up. I think it's my favorite piece by him yet.] Not only does the protagonist wake up with no memory (for very good reason (which, yes, is important (because I hate the whole "oh, let's have our character have amnesia" thing))), but he wakes up as... old. He doesn't remember getting old, and, man, what a shock that would be. Oh, and, yeah, he's the most hated man in the world. How the heck did that happen?

And that's what we have to find out, what our character is trying to figure out. It's an interesting discovery and the story is wide open at the end. Which is not to say that the story doesn't end, because it does. But it ends in the way you would enter an airlock: one door shuts and another one opens. We're in the airlock with this story, so, when the other door opens, you can see that there is a whole world to be explored out there, but Carl doesn't take us through. What lies through that door is only what we can see with our minds.

But I do hope that he comes back to this and gives us more than a peek as to what's on the other side of that door.

This is a good strong "A" of a story, possibly my favorite by Carl, thus far. It has robots. Which is not why, but... well, it has robots.
Posted by Andrew Leon at 9:48 PM