The Shelf Life of Serial

Every time I do one of these posts, it makes me think of cereal. I just can't help it. Last time, I talked about Grape-Nuts; this time I'm thinking about cereal I liked when I was a kid.

I suppose my first favorite kinds of cereals were those ones with the dried up marshmallows in them, specifically Boo Berry and Fraken Berry. 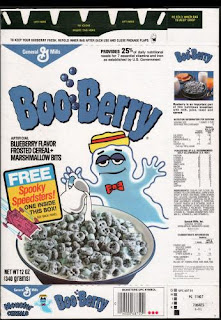 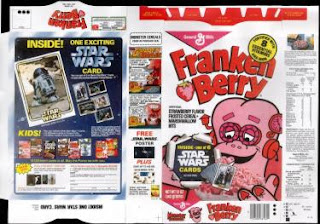 (Yes, I had to get the Star Wars one in there.)

My aunt used to buy those for my cousin and me down at the farm when I was little. I mean, like, before I was five, but I never got those at home, and, as we got older, my aunt and cousin quit being down at the farm all the time (because of school, I suppose, like me), so that cereal quit being available to me. I always wanted Lucky Charms, but my mom would never buy them for me. Or any marshmallow cereal for that matter. Any time I got any of those was over at friends' houses.

I ended up settling on Peanut Butter Cap'n Crunch. Thinking about it now, that was because my mom liked that particular cereal, so that was the only kind of sugar cereal we had around my house as a kid. Okay, not true: we also tended to have Frosted Flakes, but I didn't really like those, so I tended to ignore their existence. Now, don't get me wrong; I really liked the Peanut Butter Cap'n Crunch (and still love the idea of it, even now, but, after being off of sugar for... years, now, and after not having had any of it since, basically, living in California, I don't want to go back and try it, now. I might find out it tastes like dirt), but, sometimes, I wanted to have other kinds of cereal, like Crunch Berries, which is still Cap'n Crunch, but my mom wouldn't even go for that.

Actually, all of this cereal talk is making me realize some things about my childhood that are better saved for another day, especially since this post isn't actually about cereal. So let's play Homonym!

and talk about The real answer here: Serial!

I've been doing Shadow Spinner as a serialization for over a year, now, and I've learned a few things. You'd hope so, right? As I said when I started all of this, it's all been kind of an experiment, one in which some  of you have been participating, and I figure it's about time to let you in on some results.

1. Overall, I'd say that serialization is a very viable option in today's publishing world. I know that I've gained a lot more exposure by releasing Spinner in parts rather than if I'd just released it all at once. In that respect, it has worked very well. I've gotten reviews and ratings from people I don't know who, for the most part, have really enjoyed Spinner, and that has been gratifying to see. I've also gained an unknown number of friends on Facebook due to Spinner, people who are following me there specifically because of Spinner. So, yeah, I'd say doing the serial thing has been a positive experience. And I may do it again...

2. However, I think 34 parts is too long. I knew that from the beginning, but, not having done it before, I didn't know that I knew it. Of course, I didn't write Spinner to be a serial when I was first writing it, and the format I wrote it in, the short chapters, was to fit in with the creative writing class I was teaching. If I had known what I was going to do, I would have structured it differently. Or, if I'd really thought about how long the process would be that I was setting up, I may have combined the chapters or something. But none of that matters for this particular project, because I can't go back and change how I've done it, only remember it for the future.

4. At this point, I can't see that Shadow Spinner has had any impact on sales of The House on the Corner. Maybe it has, but, if it has, it has been small enough that I can't see it. What that means is that House has continued to sell at approximately the same rate as before I started the serialization of Spinner. But, then, House has been out for a while, so, maybe, without Spinner sales would have dried up altogether and it's only Spinner that has kept sales going. I have no way of knowing.

5. What I do know is that the release of new Spinner parts has almost always resulted in the sale of various older parts, depending on what was available for free on any given release day. Actually, most of those purchases would come later during the week after one of the free days, so that tells me people must have been reading and deciding they wanted to go on. At least, I think that's what it's telling me.

All of this means a few things:
1. As I've said before, I'm going to be collecting the individual parts of Spinner into collected volumes. That will keep it in a serialized format but also make it cheaper for people to buy in the future (once I've gotten beyond the free release days). The first of these collected volumes, "Collection 1: Tiberius," will contain 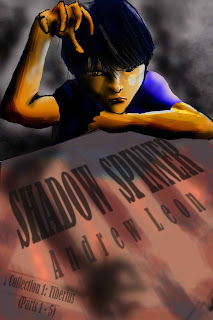 parts one through five. As an added bonus, I will also be including Bryan Pedas' story "Like An Axe Through Bone" because so many people have requested that I make it available other than in the physical book. [Each of the other collected editions will have a different story from a different author.] Collection 1 will be released on Monday, August 19 (along with "Part Twenty-eight: The Shadow Place").

2. In relation to the additional stories, I need a couple more. If you're interested in submitting an Imagination Room (from The House on the Corner) themed story to be included as a backup story at the end of one of these, please let me know. I'd really like to feature some other independent author at the back of each of these volumes.

3. Here's where you can help! And, really, I mean that. I'm not keen on asking for this kind of help, because it actually involves me asking you to spend money in a way beyond the general, "hey, buy my book," which is, actually, what I'm doing, but with a purpose. See, I'm going to lose all of my reviews on the individual parts of Spinner as I transition to the collected parts. [Yes, I've tried talking to Amazon about this, and, maybe, I'll explain in more detail later, but it would be too long to add to this post. Let's just say it's another thing I learned.] What I really need is for those of you that have already read and reviewed any of the first five parts (and any of you who have been thinking about doing it) to

Because "The Tunnel" has been out for so long, I think it's really important to make up as much ground as possible during the switch to the collection, so I would really appreciate your help.

Also, you know, you could post about the release. If you really wanted to. That, also, always helps.

4. I will be moving from a biweekly release schedule on the remaining parts to a weekly schedule. The new releases of the individual parts will still be free as will as many of the other individual parts as possible each week. However, the collections will not be free. The feedback for the later collections will not be as critical as replacing the feedback on this first collection, so, you know, pick up the later parts for free while they're available that way. But, please, buy Collection 1 and leave a review on Amazon and, even, a rating on goodreads. I can't tell you how much this will help me out. Thanks!
Posted by Andrew Leon at 9:50 PM