How Does Your Garden Grow? (an Indie Life post)

I haven't spent a lot of time talking about our little mini-garden; at least, not here on the blog, I haven't. It's not really much of a garden, since it's just a planter box, but we did get a ton of tomatoes out of it last year. This year, we expanded the tomatoes into the backyard, too. But I'm not here to talk about tomatoes. Not today, anyway.

One of the things we planted last year was nasturtiums. I think it was because we had some fantasy that we 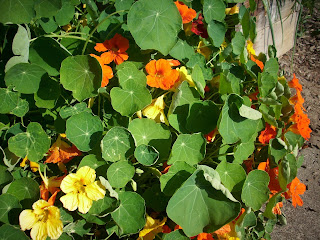 would use them in salads or something, but, mostly, we never did. I'd throw some flower petals in occasionally but not enough to really count. We skipped planting the nasturtiums this year, but that was because we didn't have to plant them. The above picture is our little nasturtium plot for this year, and, if you can see it up there in the top right corner, they didn't grow in the planter box. No, we had our own little patch of nasturtiums spring up all on their own this year, outside of the box. That's kind of cool, because they are pretty.

As you will notice, the nasturtiums are yellow and orange, which is what we planted last year, yellow and orange nasturtiums. As a big patch of flowers, they are very pretty, but... BUT none of the individual flowers stand out. It's just a bunch of yellow and orange flowers all mixed together. One flower is as good as the next. So let's say I was making a salad and I was going to throw in some flower petals for color, there wouldn't be a lot of thought involved in which nasturtiums to pick. I'd look for the ones that were more freshly bloomed and pick a few.

And that's kind of how choosing books are for a lot of people: What's newly published? What's "freshest"? But, really, it's all the same stuff, so it doesn't really matter. To a large extent, for example, fantasy written today is pretty much the same as fantasy written 30, 40, 50 years ago.

Look back up there at that picture of the flowers. Just orange and yellow nasturtiums. And that's all it was for a while. But, then, inexplicably, we had this: 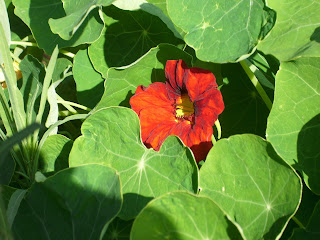 That, just to be clear, is a red nasturtium. We didn't plant any red nasturtiums. It grew up all on its own. And that's kind of like when something new comes along in the book world. It really stands out against everything else that is just orange and yellow.

Which, incidentally, is the same thing that happened with Fifty Shades of Grey. I mean, nothing has changed in romance in, like, ever, but Fifty Shades came along, and it wasn't just the same old yellow or orange flower and, whereas before, no particular book got lots of attention because of that; suddenly, Fifty Shades was the only red flower, and everyone wanted it.

Now, of course, we have lots of red flowers, 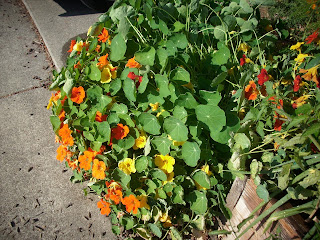 which has changed the look of the nasturtium patch somewhat (but only somewhat, as they tend to hide under the leaves more than the orange and yellow flowers), and, now, of course, we have lots of books like Harry Potter, which is not a bad thing. Adding variety is a good thing, and, although a lot of "copycats" can seem antithetical to variety, it does, actually, add variety to the overall landscape of the book world, just as it's done with our flower patch.

Then, we have these that have popped up in the planter box along with the tomatoes: 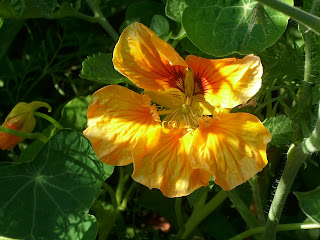 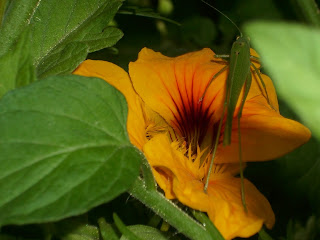 I'll call these mixing genres, which also produces some pretty flowers (and interesting books). In fact, I actually these are prettier than the red ones, though harder to see from a distance. I mean, I'm not a zombie fan, but even I have Pride and Prejudice and Zombies sitting on my teetering stack of books to read.

Often, publishers don't want to take a risk on anything but that's not yellow or orange. They look out at he flower patch and see that everything is yellow and orange and just decide that that's all people will like. But people like variety, and it doesn't always have to be good (see 50 Shades) for people to be attracted to it. The difference is all that matters. Which is not to say that you should give up on quality for being different; I'm just saying don't stick to the same old orange and yellow flowers. Or, even, red, when a lot of that comes along. Don't be... safe.

That's what I've tried to do in my own writing. I like fantasy, but I don't want my stuff to just be the same old fantasy. And, evidently, I like it to be scary, because a lot of people call what I write horror, especially Shadow Spinner, but, you know, I'm okay with that, because I don't want anyone to read this and think, "Well, this was okay, but I already read this book." [Which is what I think of anytime anyone starts talking about how great Martin is, because I already read that story except it was called The Sword of Truth and, before that, it was called The Wheel of Time, and, before that, it was called...] So, you know, write what you like, but put your own twist on it. Make it yours.

Be the red flower.

This post has been brought to you in part by Indie Life.
Posted by Andrew Leon at 10:36 PM