The County Fair came through here recently. We try to go to the Fair every year although I'm not always sure why. It's way friggin' more expensive than it's worth, and the kids do their best to make it as unenjoyable as possible most of the time. But, still, every year, we forget about the pain of the previous year and drag ourselves out to it. We went twice this year: once to look at stuff and once for rides. I do have to say that the first trip, the trip to look at stuff, was quite a lot of fun.

Let me sidestep a moment. I grew up in the 70s. The 70s birthed a lot of weird things: disco, bell bottom jeans (really?), and cars smashing into each other. When I was a kid, we called the car thing "crash 'em up derbies." I never got to go to one. I did, however, own a couple of zip racer cars (one red, one blue) that blew up when they crashed into things. The hood and doors and stuff would fly off, and you could put them on so that they cars looked new or crashed. I loved those cars. Then we moved and the cars disappeared, so I think my mom probably trashed them, but, anyway...

It was way more fun than I expected. And full of the kind of people I grew up with, which are not the kind of people you really associate with Sonoma County, but there they were. A whole stadium full of people chugging beer and... well, I don't know. It just felt like watching the people in the "beer garden" at Shreveport Captains games when I was in high school (because watching the people in the beer garden was usually more entertaining than watching the games). I have to say, though, that by the end, the big finale of the event, my wife and I were rooting just as loudly as anyone. Because, see, we'd bet each other which car was going to win.

Before I go on, how about some pictures of the event (because, yes, I took my camera (who's surprised?))? 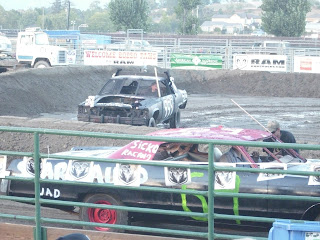 The cars coming out for the first round elimination event. 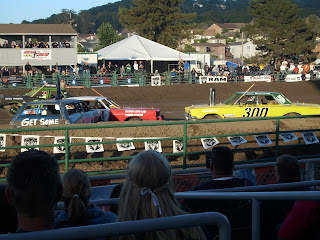 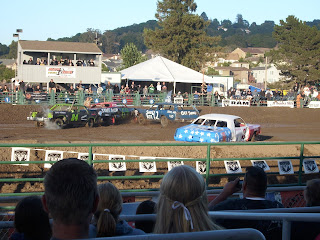 Things start to heat up. 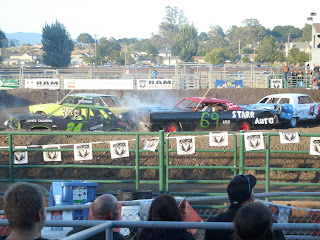 And I do mean heat up. That's smoke, not dust. 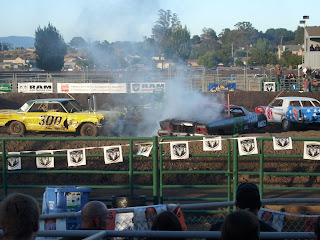 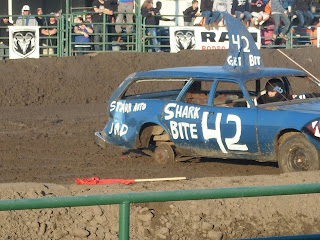 The shark car lost a tire... 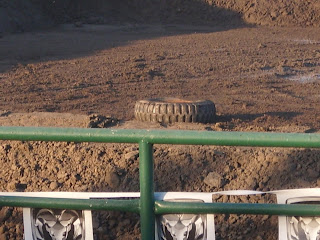 ...but kept driving anyway, which is fairly impressive, especially considering that he did pretty well. 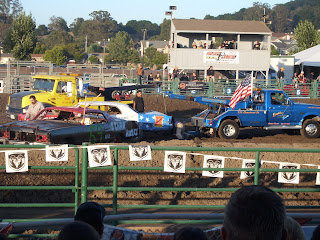 But he didn't win. Some of the losers being towed from the field, which is a pretty good indication that you didn't win.

However, there was one guy that, after being declared winner, had his car give out on him, which had to be towed from the field. That was the end of round two, I think. Then, in round three, pretty much any cars that were able to make it back to the field were allowed to compete.

What's amazing to me is how quickly these guys were able to repair their cars and get them back out to compete. They were literally (and I don't mean in that in the sense of the new google definition, either) pounding their cars back into shape with sledgehammers in order to make repairs on the engines and stuff.

Exciting bits:
Next time I'll tell you all about the finale and show you some more pictures.


Okay, wait. Here's that car being towed off the field in the middle of round two. This was the only car they stopped the derby to tow out, I guess, because it was blocking too much of what was going on. Notice the front, passenger tire dragging the ground. 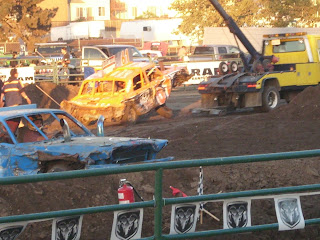