A bit over six months ago, I reviewed The Skin Map, which I did not so much enjoy. However, Stephen Lawhead is one of my favorite authors, so I didn't give up on the series. It's a good thing, too, and this is one of the reasons I tend to persevere through books that don't necessarily seem all that great at the beginning, because the second book in the Bright Empire series, The Bone House, was excellent. It really was Lawhead at his finest, and the shape of the overall series is beginning to come into view by the conclusion of this second book. 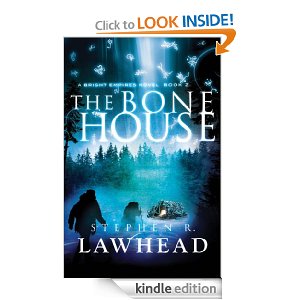 On the surface, the series is all about time travel and the search for an ultimate treasure, but that's just the book at a glance and not what it's about at all. Rather than time travel, the books deal with multiple dimension theory, and Lawhead weaves this in as the backdrop to his story rather flawlessly. The only thing I have any complaint about are the squalls that happen any time the characters ley travel. That one thing seems a little overly dramatic, but the emphasis on that occurrence has lessened in the second book, so at least it's not right in my face anymore.

The dimensional travel is made more complex by the fact that the time streams of the various dimensions don't line up, so one can travel to all sorts of different times, so there is time travel, but it's not the typical kind of time travel where there's all the angst over what you can and can't do because you don't know what kind of paradoxes you might create. It's so nice not to have to deal with that, because, at this point, that bit of conflict in time travel stories has been done to death. And the truth is, in Bright Empires, the characters don't really know what they're doing or what kind of impact they may have or how changing things in one dimension may cause ripples in another, so that's rather interesting, too.

Kit, whom I did not care for in The Skin Map, is beginning to come into his own. He's no longer just letting things happen to him, and he's figuring out who he is. Still, his importance to the story seems somewhat questionable, but there is the glimmer of potential about him that was lacking in the first book. His willingness to learn and his search for knowledge gives us enough to want him to succeed as opposed to his whiny complaining in the previous book.

This book still gives us many different character perspectives, but Lawhead seems to have a better grip on the transitions between so many characters this time, and, instead of it being annoying and disjointed, you can begin to see the tapestry that Lawhead is weaving. You can see how the different threads relate and come together and, even, begin to anticipate some of them. It has the look of a complex story that will be satisfying to watch come together.

And, I have to say, I can't wait to get on to the third book, The Spirit Well.

One last note about persevering through books that start slow or don't seem that great at the beginning:
Yes, I know some of them don't get better. Some books are just bad or you don't enjoy them or whatever, BUT, sometimes, the book (or series) is good, and you just give up on it too soon. I see so often, not the least from agents, that there is no point in reading a book if it doesn't hook you on the first page or, even, the first paragraph, and I can't say how much I disagree with that viewpoint. Some of the best books I've ever read have taken a considerable investment from me to get into them or through them or whatever, but they were worth it. If I listened to these people that say to stop reading right away if you don't love it right away, I would never have read those books, and that would have been my own personal loss. If I'd quit reading Bright Empires because I wasn't enjoying The Skin Map, I would never have gotten to The Bone House, so, if you have any cause to believe that a book is good despite your first impression of it, I would urge you to persevere. You don't know what you might miss.
Posted by Andrew Leon at 10:16 PM