Some of this will be a repeat in history, but it's probably better than linking to previous posts. Generally speaking, I've found that people don't go back and read linked posts no matter how relevant they are, so let me just start at the beginning. If you know this part... well, that's just too bad.

Last (school) year (the 2011/2012 school year), I started teaching a creative writing class at my kids' school for the middle school portion of it (they run K-8). Don't get all excited; it's not a paid thing, just a worthwhile thing. I didn't really expect much out of it; after all, they were middle schoolers. I didn't have a lot of kids last year, just about half a dozen over the course of the whole year, but I had all but one of those for the entire three quarters of the year. The really neat thing about that class is that I had writers. What I mean by that is that (most of) the kids I had already spent time writing. For fun! Another of them really wanted to write and to get better at it even though she hadn't spent much time doing it. It was a good group, and we worked on some ongoing projects. [In fact, it was because of that group that I ever started writing Shadow Spinner. The book will be dedicated to them.] At any rate, it wasn't long before I realized that their work, their writing, deserved some form of recognition and thus was born Charter Shorts.

The only real problem with that idea was that I had it too late in the year to develop it the way I wanted to. In an effort to have more material for this year's Charter Shorts, I went from teaching the class from one day a week to two days a week, thinking that would give more students a chance to participate, and to start working on the collection earlier in the year. Well, I certainly had a lot more students. Lots more. But it didn't really turn into having more material, because I didn't have any of them, this time, for the full year because of the way the elective classes work and the days I chose to offer the class. By the time most of the kids were finally beginning to get something down on paper, the quarter was over. Or someone would turn something in, and I'd say, "Let's work on this," but the next quarter would start, and it's hard to keep them working on stuff when they're not actually presently in the class.

So I ended up not being able to start the collection early because I didn't have anything to work with until close to the end of the third quarter. A lot of good stuff got left out because the student never went back and worked on a turned in story or turned it in too late to get ready it in time. Which is how I got my first taste of having to send out rejections, so to speak. One boy in particular was crushed when I told him his story wouldn't make it into the book, and I felt horrible, but there was nothing I could do. He turned it in too late, and it needed a lot of work, especially since it was very similar to another story in the book. Basically, I was left with the choice of working with this one kid on getting this one story ready in time or getting the other 10 stories I had that needed only minor editing work ready to go. Hopefully, he will hold onto to the story for next year's edition (because, yes, we are already working on plans for next year's creative writing program and how we can blend the experience from my first year teaching it and the second year teaching it).

All of that to say that Charter Shorts, Too is now available. I encourage you guys to check it out if for no other reason than to support the creative writing program for these kids and to help develop the next generation of writers. Yes, the funds from these books, such as they are, do go to supporting the program. 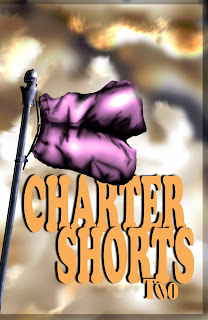 One other thing I will add:
Last year, because of how few students I had, I purchased copies of the book for each of the students published and gave them to them. I wanted them to have a copy since they were in it, you know. But, last year, I had only four students published that weren't my own; this year, there are more than a dozen, and I just can't afford to buy a copy for every student. So I put out order forms thinking that surely the parents of the kids would, at least, buy them a copy. I mean, I know that each of the kids with something in the book want a copy. They've all told me so. But... I only had orders come in from two parents, which means that about 10 kids will not get a copy. And here's where you can help: any copy of the physical book purchased, will enable me to purchase a copy of the book for one of the kids (I think it works out to 3 of the Kindle editions to purchase a physical copy (or 2.5)). If you'd like to help out, buy a copy of the book and email me or leave a comment letting me know that you've purchased a copy, and I will mark a copy to go to one of the students that isn't getting one. Hopefully, I can make sure that each student gets a copy, because, for most of them, this is their first time (and maybe only time) being published, and it would just suck to never have a copy of that. You know?

On another note, in comparing the two editions, I think the first Charter Shorts is probably better overall, but I think that the highs of this new edition are much higher than the highs of the first edition. I'd tell you which are my favorites, but, just in case any of my students read this, I'm going to choose to keep that information to myself. I will say that I have some talented kids. And, as I related recently, more talented than some adults I've read. I hope you'll give it a look.
Posted by Andrew Leon at 10:25 PM