House Arrest (and "The Undying") 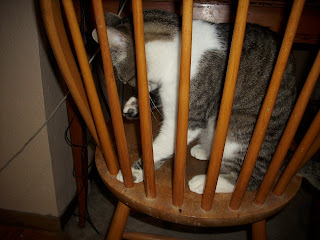 My cat has been under house arrest, lately, or, as everyone else likes to say it, he's grounded. What did he do? Was he beating up the other cats on the street? Did he steal some catnip? No, nothing like that. He just keeps getting himself hurt. And, actually, he's the cat that gets beat up, so that's probably how he ended up getting hurt. He's just too curious for his own good. 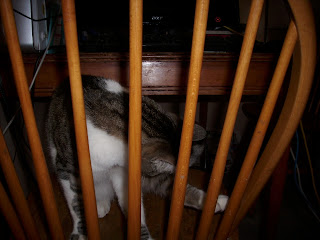 A couple of weeks ago, he got this new wound on his back just above his tail. It's still swollen, but, at least, it appears to be healing up normally and won't require a trip to the vet like the last wound (which I talked about here). However, it was the fact that he come home limping a few days ago that got him grounded. And I don't just mean he was limping; he couldn't put any weight on his right foreleg at all. It was bad enough that he told me, "hey, that hurts," when I had barely touched it trying to check it out. So, yeah, for this week, at least, he's become a house cat. Here is how he spends his days: 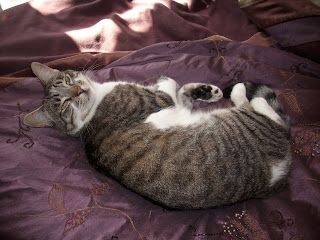 People talk about a "dog's life," but, seriously, no dog has it as good as any cat.

Being an outside cat, we've never had a litter box for him; there's never been a need (except that one time when he had a potty emergency in the middle of the night and I wasn't able to throw something on quickly enough to get him outside). However, one of the first things I did after he got himself grounded was to go and buy him the requisite materials to take care of his needs in the house, which he has done very politely.

Now that his leg is getting better (in fact, this morning, he was back to being a total spaz and acting as if nothing is or was ever wrong), I'm torn between going back to the normal routine or making him an inside cat. On  the whole, he seems to be adapting to being inside all the time pretty nicely. Not that he hasn't had a few... episodes. Like yesterday when he kept jumping up on me and typing in my document. He said something like, "xxxcdxccd." I'm not sure what that means in cat, but I'm guessing it must be something like, "Help! I'm being held prisoner in a fortune cookie factory." Or, maybe, it was just "FEED ME!" That's the big change for him: he doesn't get to hunt lizards anymore.

For me, though, aside from the fact that he's constantly getting banged up from playing outside all of the time and the fact that I have to go and chase The Orange away several times a week, him being inside relieves the worry of him getting trapped in someone's car and getting carried away by accident. Being right next to the park, we have foreign cars out there all of the time, and my cat is obsessed with them. He has to go smell every car that parks out there. He gets up in the backs of trucks. And, if anyone leaves their windows open (which they frequently do), he hops up onto the door and explores the inside of the car. In fact, when the guys were delivering our new washing machine a few weeks ago, he did his best to get inside the delivery truck. The delivery guys thought that was so funny.

The verdict is still out on his final sentence. I suppose we'll have to see how crazy he ends up driving everyone by being deprived of going outside. If he ends up being as bad as my daughter is when she's sick and can't go to school... well, let's just say that's not a pretty sight and leave it at that.

In other news, today is the FREE! release of "Part Twenty-two: The Undying" 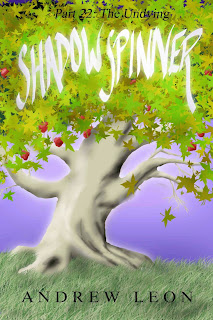 This is the chapter where Tib well and truly begins to understand just how weird the Garden is. Or, at least, the denizens of the Garden. Basically, every time he thinks he knows what's what, something changes.
FREE! today, Monday, May 27:
"Part Twenty-two: The Undying" (Also FREE! Tuesday, May 28)
"Part Twenty-one: The Chase"
"Part Twenty: The Sword of Fire"
"Part Nineteen: Lost in the Garden"
"Part Fifteen: Food of the Garden"
"Part Fourteen: Anger and Laughter"
"Part Thirteen: The Clearing"
"Part Twelve: The Gash in the Floor"
"Part Nine: The Shadow of the Tree"
"Part Eight: The Cold and the Dark"
"Part Seven: The Moth and the Shadow"
"Part Six: The Man with No Eyes"
"Part Three: The Bedroom"
"Part Two: The Kitchen Table"
"Part One: The Tunnel"

There's 15 of the 22 parts of Shadow Spinner available for FREE! Go download, enjoy, and tell all your friends. Oh, make sure you read it with the lights on. Or so I've been told.

As a special bonus, I'm also gonna throw in The Evil That Men Do for FREE! It's kind of Tib part 0, but it's not going to be in Shadow Spinner, so grab it now. Don't forget to let me know what you think of it!
Posted by Andrew Leon at 10:25 PM

Email ThisBlogThis!Share to TwitterShare to FacebookShare to Pinterest
Labels: cat, catnip, dog, grounded, house arrest, man with no eyes, Shadow Spinner, Sword of Fire, The Evil That Men Do, The Orange, The Tunnel, Undying