I've taken ownership of  the cat. 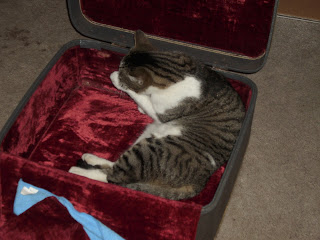 As you can see, I've got him all packed up and ready to go. Actually, no, that's just the cat taking ownership of my daughter's accordion case. Anything that looks like something he shouldn't be in is something he decides he wants to be in.

But back to my original statement: I've taken ownership of the cat. Not that I know what I would do if the technical owner showed up at my door tomorrow and said he wanted the cat back. I suppose I could say, "Let's leave it up to the cat" (because I'm sure the cat would pick me, since,  in effect, he already has), but I don't know if that's a thing with pets like it is with kids.

See, although the cat clearly wants to live with us and has been living with us for quite some time, it still fills me with angst knowing that there's some guy in the neighborhood that is the technical owner of the cat. The fact that he could, theoretically, knock on my door and break my daughter's heart fills me with all sorts of angst over the whole cat issue and what we should do about  the cat. But no more.

As of today, I'm declaring the cat ours. Sort of like planting a flag. See, now, I've had to spend money on the cat, real money, and if I'm going to have to take the cat to the vet for medical attention, the cat is mine. That's just all there is to it.

A few weeks ago as we were walking out the door to go somewhere, the cat came limping up with a swollen left shoulder. It looked rather like someone had stuffed an orange in  there, but that wasn't the first time the cat had hurt himself, and we had somewhere we had to be, so we let him in and left. The swelling had gone down by the time we got home, so that was good. We did see, at that point, that he had some kind of wound in his shoulder.

There's an orange tabby cat in the neighborhood that is the neighborhood cat bully. He likes to stand over other cats making this horrible meowing, pinning them down. He does this without actually touching them, but I've had to rescue Jack (my cat) from him several times, and I've seen him keeping other cats hiding under cars or against walls or whatever. We don't like this cat, and I think it and Jack may have gotten into a scrape that resulted in Jack's wound. That or the dead gopher Jack left as an offering for us (and, yes, they are actually offerings) managed to bite Jack before he partially skinned it.

But Jack didn't "belong" to us, so I decided to just keep an eye on the wound in the hopes that the actual owner might show that he was still keeping an eye out on the cat and do something about it. But that didn't happen.

Still, the wound seemed to be healing up just fine. Jack quit licking it all the time, and it had closed up and everything. Until a couple of days ago.

This may be coincidence, but Jack and The Orange (my name for the bully cat) had another go at it. The Orange was making his horrible noise, and I went out to see what was going on, and The Orange had Jack trapped up against the gate to our backyard. I got in between them, and Jack took off toward the car (where he often hides from The Orange), but The Orange went for him, and Jack turned around and took a swipe at him. Good for him, right?

So, maybe, the cats went at it, and Jack's wound got reopened. Or, maybe, it was just itching because it was healing. We don't really know what started it, but Jack started licking at it again and licked all the hair off of it and the surrounding area. It was pretty gross, but the wound was smaller than the nail on my pinky finger, so, again, I thought we should just keep an eye on it.

Today, though, something changed in all of that. The wound broke open, doubling in size, and was actively oozing. I don't know if he scratched or licked it open or if he got into another fight or what. It was fine when he left the house this morning, but, when he came back in around 2:00, it was a mess.

That was the end of the angst. I took ownership of the cat and took him to the vet. He got all kinds of shots (both immunizations and an antibiotic) and a couple of staples in his shoulder. 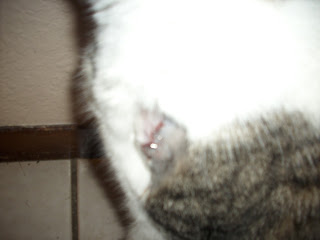 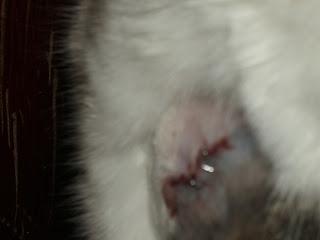 I figure for $300, the cat is mine. Especially since he has to go back in two weeks and again in four weeks. The good news is that the vet said he's a strong, healthy cat. In fact, everyone was admiring him. The cat has got some charisma is all I can say; after all, he got me to like him. I mean actively like him, not just kind of like him in that way I like most animals.

And here's the allegory:
A lot of things in life are like Jack. There are these things out there, situations or whatever, that someone else should have responsibility for. However, for whatever reason, those people won't take responsibility for whatever it is. Maybe, they just don't care. Or care enough. Or, maybe, there are some sort of extenuating circumstances. Who knows. In the end, it doesn't really matter. What matters is that, if it's something you care about, you take responsibility for it. Just do it. Don't wait for someone else to step up to the plate and do the job. Most of the time, if you're waiting for that happen, you're just going to be disappointed.

Let's look back at the situation with Jack:
Initially, it was apparent that the cat was just out on his own nearly all of the time. He wasn't really being cared for. That included being fed on a regular basis. Whether this was the fault of the cat not going home to eat or the fault of the "owner" not providing food, doesn't really matter. Now, we didn't know if the cat had an owner at the time, so we started slipping him so food, but, even after we found out who the owner was, it was clear the cat was still going unfed. Eventually, it was also clear that the cat only ever stayed at or around our house. We took on the feeding responsibility because the cat was (is) important to my daughter. It was something that needed to be done, and no one else was doing it or doing it adequately. All of that lead to us taking care of the cat's wound. Because someone had to do it. The person that should have been responsible didn't do the job. Because we care about the cat and don't want him to die from something that is completely preventable, we took care of it.

And that's kind of how life needs to be. People need to pick up the responsibility for the things they care about and quit waiting for other people to do it. Even if those other people are the people that ought to be doing it. Sometimes, those things are even our things. Things that we ought to be responsible for, things we say we care about, but we're too busy waiting around to see if someone else will come along and do them for us. Those things can cause all sorts of angst.

It felt good to actually say, "You know what, I'm taking responsibility for this cat. This cat is now mine." No more angst. So, if you have a Jack in your life, pick him up and take responsibility for him. Scratch him under the chin and listen to him purr. 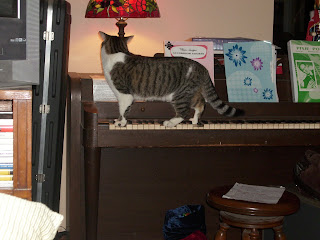 The cat also plays the piano.
Posted by Andrew Leon at 10:55 PM