I don't get this whole cat thing on the Internet. What is it about cats? Seriously, what is it? More people like dogs, more people have dogs, yet it's cats that populate the web. Is it because cats are so weird? I'm sort of inclined to believe that. Cats are insane, and people want to watch it. Like a train wreck. Sure, dogs are cute, but they don't do things like this: 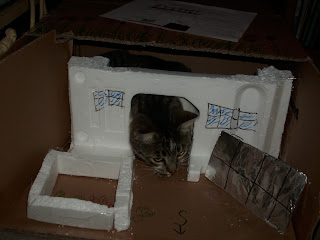 And, well, other things that the cat quits doing as soon as I get out my camera. He sits up and looks at me like "I don't know what you're talking about. I was just sitting here. Maybe you're insane."

And, maybe, I am. But that's beside the point.

Or, maybe, it's all a plot by cats to take over the web. A great PR campaign or something. Whatever it is, the few posts I did about our cat interloper got an inordinate amount of page views, which I just don't understand.

Those posts also lead to an offer of a sponsored post. My first. It was a lot of money. Okay, so it wasn't really a lot of money, but it was a LOT of MONEY. More money than I've made all year on e-sales of my book stuff. All because of the cat. And I have to say it was tempting. Oh so very tempting.

I mean, that's the goal, right? To make money off my writing? But there was an issue. I had to advertise for the people that would be paying me to write the post, and the post itself wasn't such a big deal; it was supposed to be about celebrities doing work to save pets or some such. That sounds good, right? But the people that wanted me to do this are from an online gambling website, and I would have had to post links to their site in the post, and I just couldn't bring myself to do that. Yeah, I'm not a supporter of organized gambling.

At any rate, it was kind of a surreal experience. On the one hand, it was, well, it was nice to get asked, to be recognized, you know? On the other hand, it had less to do with me and my actual writing than it had to do with the fact that I had put up a few posts about a cat. And, then, there was the whole gambling thing. It was kind of a bummer to have to turn them down. It was, after all, the first (and only) time I've had an offer like this, and, of course, the thought is, "If I turn them down will that mean I will never get another offer like this?"
That's kind of hard to say, but the one thing I did know, do know, is that I didn't want it to turn into an ongoing series of posts supporting some gambling website.

So... here's my unsponsored post that's not really about cats at all, although there is a cat in it, and  the cat sort of started it. I wonder what the cat would think about that. It's probably all a part of his infiltration plan anyway. Get into a new house and get the people to post pics of him on the Internet, thus spreading the control of Catkind across the world.

Personally, I think cats are still just upset about losing that whole godhood thing that the ancient Egyptians gave them. They're still trying to get it back...
Posted by Andrew Leon at 10:18 PM