On the surface, Skyfall is a really excellent movie.That's because it's a really excellent movie. If you take it as an individual movie and forget that James Bond already exists. That includes forgetting the previous two Daniel Craig Bond films. As an individual movie, it really only has one flaw: its title. The title is a lie and has nothing to do with the movie at all.

Yeah, yeah, I hear those of you out there that have already seen it saying, "But..." (and I'm not finishing that sentence, because I'm avoiding the spoiler). It seems pretty obvious to me that the title was arrived at completely separately from the movie. Something like:
"Wouldn't Skyfall be a cool title?"
"Sure, but it has nothing to do with the movie."
"Well, can't we work it in somehow?"
So, yeah, the "word" was just thrown into the movie so that it could be used as a title and has absolutely no meaning whatsoever. I felt a little bit cheated by that. But not really enough for it to take away from the movie experience overall. It's sort of like the pricker you get in your finger while picking blackberries; it's annoying, but it's not gonna keep you from enjoying the cobbler.

So for the movie itself:
The action was great. There was only one bit that I thought really strained plausibility (it had to do with a subway train), so that was pretty good. But, then, these new Bond films have been better at "keeping it real" than some of the older ones.

The acting was great. Daniel Craig is a great Bond, and, of course, Judi Dench is just great. Ralph Fiennes is also in this one, and he was surprisingly good. I say "surprisingly" because, while he can be great, he is not always great, and this seemed like the kind of role where he was more expected to look good rather than be good, but he was quite good, and I'm glad that his character is one that will (should) be returning.

The tech... well... there's a lot of computer stuff in this, hacking and all sorts of things like that, and, mostly, that was okay, but...
Well, I went to see this with my friend that works for... um, Lucasfilm? Well, right now, he works for Lucasfilm; I suppose they will keep that name even once Disney takes over in January, because that's how they do it, so, yeah, I went to the Lucasfilm premiere of the movie with my buddy that works there. Well, two buddies, now, because one of our mutual friends now works there with him. I think he's trying to recruit everyone he knows into working there, and I want to know when it gets to be my turn, but I suppose they don't really need any writers. That's not his department anyway.
But I digress...
So I was there with my friend, and there's this scene where Q is explaining some computer something-or-other with a lot of technobabble, and my friend just starts laughing. Not LOLing or anything, just a sustained chuckle. So I know whatever he was going on about was gibberish, because my friend does the whole computer thing. I'm fairly technologically challenged (just ask my wife (also notice that I still have that same, stupid generic blogger wallpaper for my blog)), so I probably wouldn't have noticed if he hadn't been laughing; I mean, I don't know what they're going on about either way. Well, except for the part where I just sort of assume that it's all meaningless technobabble anyway.

However, as much as I enjoyed it as an individual movie, I was more than a little let down with the movie in terms of its relationship to the other Bond films. There are two main reasons for this:

1. With Casino Royale and the re-boot of the Bond franchise, they created an ongoing story line. Quantum of Solace, while not the greatest Bond film as an individual movie, was an excellent continuation of that story. It felt like they were putting things in place for something really cool, and I was intrigued by where they were going. With Skyfall, though, they just drop that whole story line and, at the moment, have no plans to go back to it. This is incredibly disappointing, and, for that reason, despite how good Skyfall is on its own, it is, itself, also disappointing.

2. Skyfall feels like even more of a re-boot than Casino. There is a grasp in this one to make this Bond the definitive Bond. The Bond. An attempt to sweep away all earlier versions, while still giving a nod to them, and actually make this 007 James Bond. I can't be more explicit than that without giving spoilers, but I just want to say that I wasn't entirely happy with this aspect of the movie in relation to the other Bond movies. Casino did a fine job of updating the franchise and setting up a new sequence of movies. There was no need to go even further back and attempt to shove all the other movies aside.

But, still, all by itself, Skyfall is well worth seeing.
Just ignore that the time frame of the opening events doesn't quite match up, and all should be well. Maybe, I shouldn't have pointed that out, though.

NOTE:
Remember that Friday, this Friday, Nov. 16, is the Oh, How I Miss You blogfest hosted by myself, Alex Cavanaugh, and Matthew McNish. If you haven't already signed up, follow one of the links and get over there and do it! Let's let some people  know that we've noticed their absence. It's always good to know you're missed! 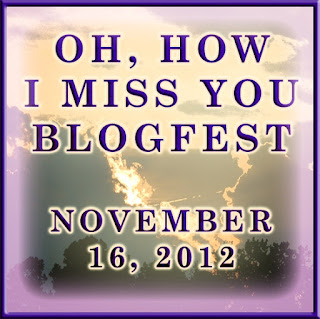