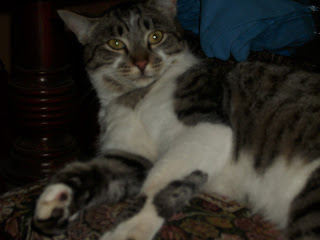 This whole thing with the cat took place over months worth of time starting last spring some time. It caused my daughter no small amount of anxiety when we took our trips during the summer, and we still didn't know if "Sam" had an owner. Who would take care of the cat? Not that we were taking care of the cat, not exactly, but we were keeping an eye on it and slipping it some food every so often. As it turned out, many people were slipping that cat some food every so often.

In fact, a woman a couple of doors down would feed the cat every few days as a distraction to keep it out of her garage after the cat got closed up in there one day. That might have been okay except that she has a couple of dogs (that don't like cats), and she discovered the cat when it dodged into her house as she was going into the garage through the door in her house. After that, she would give it food in her driveway so that she could close her garage door without the cat slipping inside.

And that cat does like garages. He got shut up in ours one morning as I was getting the bikes out before school. I did actually check for him before I locked the garage back up because he'd been hanging around outside, and, when I went to lock up, he wasn't outside anymore, but I didn't see him in the garage anywhere, so he got locked in. I found him waiting to come into the house from the inside of the garage a few hours later by the surprisingly loud sound of his meows. Talk about animals being shot from cannons... that's how quickly he sprang into the house.

When we did finally find out who his owner is, the man said jokingly to my daughter, "Well, don't feed him, or you'll never get rid of him." I didn't tell the man we had already been feeding him. Not that I didn't already know that piece of wisdom, but we (my wife and I) had already had the discussion about the ramifications of feeding the cat before we started doing that. Besides, the cat was being fed by many other people, many of  them feeding the cat that-was-now-Jack on a much more regular basis than we were. But we hadn't known if Jack had an owner and it was often apparent that he was hungry.

Then, Jack started wanting to come into the house. For a long time, we wouldn't let him. At least, that was the idea. But he's a cat, and the kids don't always know what to do about such things as the cat sliding under the open door, so he started coming in on his own, much to my daughter's delight. At first, we'd just snatch him up and deposit him back outside, but he really wanted to be in our house, so, eventually, we just kind of let him. He is, after all, a nice cat.

We started talking about what we might need to know about cats if he was going to hang around all the time until my wife finally said, "It's time to look up cat behavior." What we found out is what I already knew: cats are weird. But we also found out some very interesting things about them, not the least of which is that "they" (they being the people that know and study cats) believe that cats adopt people rather than the other way around. Rather like wands choose the wizard in Harry Potter. This is something I also sort of knew but not to the extent that it was presented. I mean, cats actually adopt their owners.

It's not like with dogs. You go and get a dog, and the dog is like, "Yea! A human that wants me!" It jumps up and down and licks your face and forms a bond with you rather like when you spend time with a kid or another person. Dogs socialize. They respond to affection with affection. The dog becomes your friend.

This is not how a cat works. I mean, we joke about it all the time, but it's really not how a cat works. You go get a cat, and, yes, it will let you feed it and take care of it, but it is not "yours." Not to the cat. The cat is just using you. Unless, of course, it decides that it wants to "own" you. Adopt you. It may well never decide that, though, and you would never know. Not until someone else comes along that the cat does actually want, at which point the cat may just take off. It no longer needs you.

All of this stuff about cats made me think of readers, but I'll get to that next time.

For now, it seems we have been adopted by this cat. It was kind of sealed when we kicked the cat out one night, because, you know, he's not ours, but he was waiting at our front door the next morning at 5:30 to come back in. It was clear that he hadn't had anywhere to be all night, and it had been cold, and I felt really bad. The next night, we didn't kick him out, just waited to see if he would want to stay or ask to leave or what, and he went and snuggled into bed with my daughter.

He doesn't always stay, and, if he asks to leave, we let him out. We also let him in, now, if he wants to come in. We've let him adopt us while being fully aware that he doesn't "belong" to us. It's clear, though, that we belong to him. At least from his perspective. It's kind of surreal, and the dog doesn't know what to think of it. But, for now, it is what it is.

It is highly amusing, though, to watch the two animals trying to figure out how to play with each other. They clearly have two different styles of play and can't figure out how to get them to work together, even though they want to. 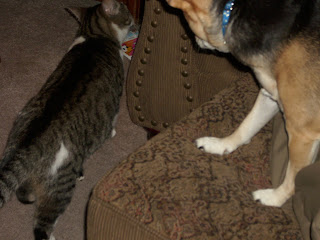