Not Just For Kids

One of the things I worry most about as a writer is being pegged as a writer of kids' books. Unless that's all you want to do, it can be a huge ball and chain. Once you get that label, if you try to break away and do something else, everyone gets mad at you. Like you can't possibly do anything else. My goal with The House on the Corner was not to write a book for kids but to write a book that was accessible to kids. Yes, I want kids to read it, but I also want adults to read it. In this, I was, actually, striving for something along the lines of Harry Potter or The Chronicles of Narnia (although, really, Lewis was writing for kids, but I think he surpassed himself).

In truth, what I was striving for was something more along the lines of Animaniacs (the greatest cartoon EVER!) or Looney Toons. Kids love that stuff, but you can't really appreciate them until you grow up and see the entire other level of humor. I'm not saying I achieved anything along the lines of either of these shows, but, still, it's the kind of thing I was going for.

So... if I don't want to get labeled an author of kids' books, why did I write a book that lends itself to that? Well, the answer is really simple, actually: I didn't want to have to tell my kids they couldn't read it. That can be a huge motivator. So what you get is The House on the Corner and, now, the Tib "stories."

But the truth is that the "real" stories in my head, the "big" ones, are not for kids at all. Not that I want to belittle what's going on in House or Tib, because I don't view those as "small" stories, but one of the things in my head would fall under epic fantasy (I think), and that makes me think "big." The other deals with... well, big issues, I guess. Not growing up type issue, like House, but society issues.

My original idea when I started all of this writing business was that I was going to start out by writing short stories. That idea didn't live very long as fell into House pretty soon after that. I did, however, start one short story (this is was nearly 3 years ago). Yes, I did say "start," because I never finished that first story. Well, that is, until now.

It's interesting to me in that that story started out as just this isolated little thing. It came out of the idea of what we can do with words to other people (but I don't want to say more than that, because, really, more than that would give the story away). Later, much later, I sat down and wrote "The Tunnel" (The Tunnel being part 1 of Tib, for those of you that haven't been following). As I was writing it, I realized that these two stories were linked, and a much larger world started growing in my head (yeah, it's kind of painful, and there are all sorts of operations (usually involving keyboards and the banging of heads) required to get things like that out once they've started growing).

The problem here is that that first short story, that one I started so long ago, well, it's not for kids. I will just happen to fail to mention it to my kids even though they're reading all about Tib. They'll just have to wait till they're older to find out how all of that came about. Okay, well, maybe my oldest will get to read it, but it's really going to depend upon his ability to keep his mouth shut to the other two. I don't think I would think about things like this at all if I mostly dealt with high schoolers (I was reading things much more mature than this when I was in high school), but, no, I teach creative writing to middle schoolers and spend lots of time in elementary school classes, and I have to worry about parents letting their kids read this story without looking at it first for no other reason than that I wrote it and their kids love The House on the Corner. [Yes, I'm going to be spending a lot of time telling parents at my kids' school "make sure you read this before you let your kids read it (because a lot of them have Kindles or access to one).]

And, now, finally, to the point:

This post was supposed to be the announcement of the release of a new story, but, alas, I'm not quite finished with it and getting it all set up on the Kindle. Things have just been too busy, lately, but I should have it ready by sometime early next week, so I'm going to go ahead and debut the cover today.

First, though, for those of you who have been following the adventures of Tib (if you can call them adventures), this is sort of a prologue to all of that. Or an origin story. But not really. At any rate, it is the story that gave birth (no pun intended (yes, you'll have to read it to understand that)) to the world that Tib lives in. The title is "The Evil That Men Do," and it will be available exclusively on the Kindle sometime soon.

The inestimable Rusty Webb is, once again, responsible for the cover, and I really love it. 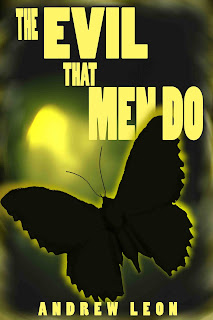 And because I'm such a nice guy, I'm going to give you a look at some of the other designs that were part of the process. 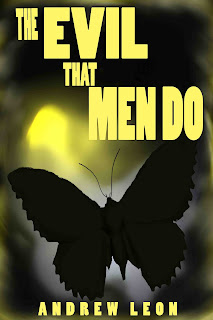 My wife (and, I think, Rusty's wife) liked this one best, and, while I really like the silver, it doesn't evoke the moth and flame image the way the other cover does.

And because I think this next image is really cool, even if it doesn't work for what I was going for, here's one other "work in progress" piece: 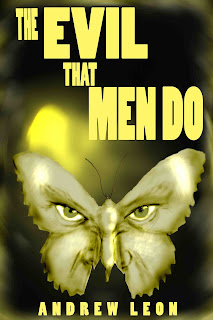 If you don't already follow Rusty, click that link I left up there, and go do that!

Look for (actually, I'll tell you when) "The Evil That Men Do" to be available for the Kindle sometime in the coming for the LOW, LOW price of only $0.99!!!

Also, remember, the sale on The House on the Corner is ending today. Tomorrow, I'll set the prices back to what they're listed at on my House page, but, for today, you can still get it for the LOW, LOW price of only $0.99!!! And, hey, you can't beat 2-for-1 on signed copies of the physical book! Okay, well, that's not precisely true, because you could beat it, but I can't. Sorry, folks, that as low as I can make it go, so buy your copies while you have the chance, and give one as a gift!
Posted by Andrew Leon at 1:07 PM