[Note: Tib part 8 is up >points to the Tiberius tab above<. You should go read it and let me know what you think. Next week (I hope), look for some changes in the Tiberius tab.]

I'm waiting for the dog to eat, right now, so that we can head out on our walk. She seems more content to be taking a nap, though. You know, I think that's what that saying "a dog's life" is all about. Naps. I want one of those. But... this post is not about napping, it's about walking.

As I've mentioned, we have a troll bridge off to the right down the creek path. But, if you go to the left, there is something completely different. Goblins. Actually, the goblins are sort of everywhere, but the closer you get to the troll bridge, the scarcer the goblins become. Not that we've actually seen the goblins, but we know that they're there. "How's that?" you might ask. Well... here's how: 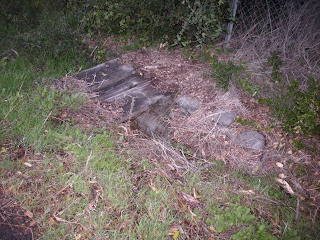 This is an entrance to Goblin Town. There are many of them along the path, especially if you go left out of the park. Trolls eat goblins just as readily as they eat people, so there are not so many entrances to Goblin Town if you turn right and none near the bridge where the troll lives.

The dog finds the smell of the goblins very interesting, and she always wants to explore the doors to Goblin Town, but goblins love to eat dogs (they're a delicacy), so we do our best to keep her away so that no lurking goblin can reach out and snatch her up. Of course, goblins also love to eat little children. They're so juicy and tender! They especially like to throw children into pots and cook them up in a stew. They'll eat adults, too, but it's not their preference. 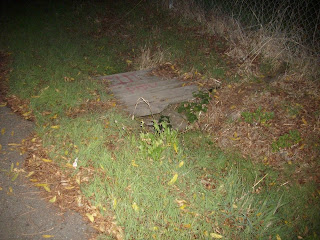 This is another entrance into Goblin Town. If you look closely, you can see the warnings painted on the door. Although, goblins love to catch people, they also don't like uninvited guests, so they paint warnings on everything to keep people away.

The trail isn't safe after dark. Daytime is mostly okay, though. Goblins don't like sunlight, and they tend to stay underground during the day. I've heard that sometimes they creep out on really cloudy or rainy days, but we've never seen any. Yet. 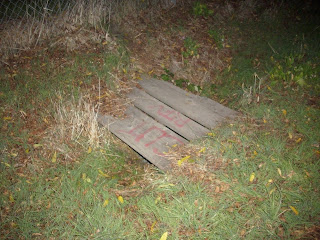 A better view of the "keep out" warning. It's written in goblin language, though, so I'm not sure how it actually translates. 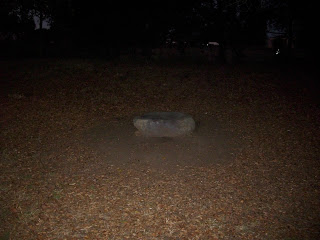 ﻿This is one of the main entrances into Goblin Town. A fortified entrance. It's like a concrete bunker. It was getting late as you can probably tell by the darkness of the picture, and I had to run before I could get a better picture as I heard the concrete lid start to slide open. Not a place you want to be when the goblins come out!
Some time ago, there was a battle between the goblins and the early human settlers in the area. Here is a picture of the place where the human's fortress once stood: 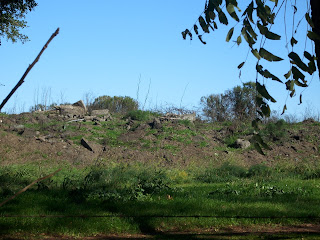 The foundation is all that's left, so, as you can see, the goblins won this great battle and drove the humans out for a while. Drove us out. But, you know, I didn't know those people, so it's kind of easier to just think of them as the "humans." 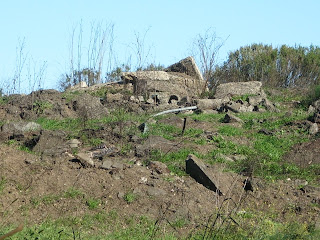 There is a new watchtower built to keep an eye on goblin activities in the area. I thought I had some pictures of it, but I'm not finding them. At any rate, it's disguised as a practice area for the local fire department, but some of us know the truth. It's a good cover for all the personnel that come and go that are busy monitoring the goblins.
Which brings us to the end of today's exploration of the path where we walk the dog. My kids enjoy learning about the "history" of the area, and my daughter, especially, asks lots of questions about the entrances to Goblin Town. She has even mentioned becoming a goblin hunter and going down to wipe them out. The boys generally just content themselves with singing that song from the animated version of The Hobbit.
"Down, down to Goblin Town..."
Posted by Andrew Leon at 11:07 AM