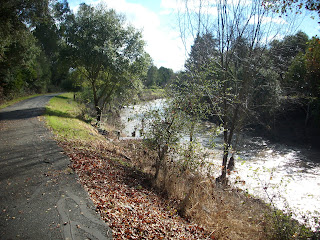 A couple of weeks ago, while out walking the dog, I saw an otter. Now, this isn't the first otter I've seen, but, the first time I saw one, it was not very close, not close enough that I could tell definitively that it was an otter, in fact, and it was kind of small. It was neat but not impressive.

This last one, though... it was both neat and impressive. Unfortunately, I didn't have my camera with me. Not that it really would have mattered, because my camera is slow and doesn't like to take pictures of things that are moving. It was swimming downstream and toward me, and it was pretty big. As it approached, it suddenly dived, and I thought, "oh, well... that was pretty cool." But it surfaced just even with me and came to the shore of the creek to eat whatever it had caught. It was, maybe, 25 feet away. Close enough that I could hear its little jaws crunching whatever it was that it was eating. When it finished, it swam back out into the flow of the water and continued on downstream, occasionally diving, but it never banked itself to eat again while I could still see it.

As I was watching it, it occurred to me that it's events like this that make reading worthwhile. It's the injection of the unexpected into a story that makes us want to keep reading. Now, it's not that I didn't already know this, but I'd never thought about it in exactly this way before. I mean, we all know that no one wants to read about everyday life if that's all there is to it.

See, I walk the creek path everyday. It's beautiful. Really. But I do it everyday. It's not that it gets old, exactly, because I like to watch the water while the dog is doing her... well, taking care of her business. Which includes digging for gophers; although, she has yet to catch one. However, it does tend to be just the same old, same old. Things like the otter, though, remind me to keep my eyes open and pay attention to my surroundings. There are often neat little things to see. Like the hawk that landed on a branch just over the heads of my son and I. It was completely framed by the other branches around it so that it stood in a patch of sky with the full moon (it was daytime, though) back behind it. You couldn't have planned a better picture (and I did have my camera with me, but, by the time I got it out, the bird flew away).

Anyway, what I'm saying is that it's important, incredibly important, to ground your writing in the real. Or the realistic. You want it to be believable. In the midst of that, though, you want to toss in bits and bites of the unexpected. It doesn't matter how beautiful your writing is if it's just about the mundane. However, it doesn't matter how much of the unexpected you throw into your stories if they're not believable. Really, it's like adding salt to your food. Just enough to make it tasty but not so much that it ruins the flavor of whatever you're eating.

And there's your writing tip from the creek...
Posted by Andrew Leon at 1:10 PM