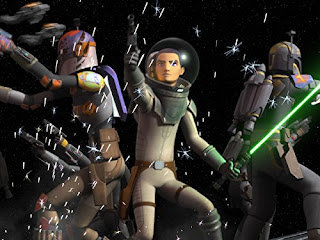 Spoiler alert: Kallus didn't die. I'm a bit surprised. Not that the way he didn't die wasn't cool, but I really expected that he would be one of the characters that they ended. Yes, that means some characters got ended in this season finale.

Sabine returned, so that was cool. Not that I think she'll be staying around, but involving the Mandalorians is always interesting.

And I suppose that's really all I have to say about this. These two episodes are mostly combat and anything else I could say would be spoilery.

They do leave me ready to get into season four, though, so that's where I'm heading.