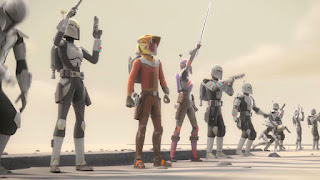 -- "Blowing things up definitely runs in your family."

Man, talk about heart-wrenching... Which is something you can't often do in Star Wars and even less so in the animated shows. But this episode...
Well, I'm getting ahead of myself.

Oh, fine, I know someone is going to make some comment about Han's death or this thing or that thing that have made people (my wife) cry, so, sure, Star Wars has those moments. But, mostly, it doesn't. Those are not the moments people think of when they think about Star Wars.
Except Rogue One.

Anyway, that's all beside the point.

The point is that Sabine leads a raid to rescue her father, who is being held captive by the Empire.
Yes, of course, it's a trap.
Also, Ezra learns how to use a jet pack. Sort of.

But the episode is kind of tragic. Not kind of. It is.
They played the sad Star Wars music as the end credits.
See what I'm saying?

"Wow, this just got more and more..."
"Interesting, The word you're looking for is interesting."
"Nope. Just more."