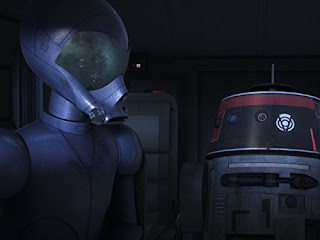 -- You are mistaking my attention to detail for an attack on your obviously fragile ego.

One might be tempted to think that I've been inspired to get back into Rebels because of the recent release of The Rise of Skywalker. One would be wrong. Actually, it was the ending to The Mandalorian which has put the fire back into me to finish Rebels. Sorry not sorry for the spoiler but the first live action appearance of the Darksaber! Well, I have to know how it ends up where it ends up because, right now, Sabine has it.
This episode has nothing to do with any of that.

No, this episode is a spy mission gone awry. On the surface, it's a chance for us to get to know more about AP-5 and Wedge... except that that doesn't really happen. AP-5 is the same as he always is. Well, except for something that happens at the end of the episode, a something that is probably the most bizarre thing I've ever seen in Star Wars. That doesn't sound quite right. Star Wars, once accepted as a world setting isn't bizarre at all. I can't think of anything from any of the movies or animated shows that I would call bizarre -- okay, a case can be made for the Holiday Special being bizarre, but I haven't seen that since it first aired, so I'm not making that case -- but this was bizarre. So bizarre that my wife looked up from whatever it was she was doing that had nothing to do with watching Rebels to say, "What the fuck is going on?" I may need to watch it again.

The appearance of Wedge in the episode, which I was initially excited about, was a letdown. His entire presence seemed to hinge on a joke that he was on the mission with the two droids because no one else wanted to be. Mostly, he just hung out in the background and didn't speak. Zero character development. It was definitely a missed opportunity to give us some background on a beloved character.

In the end, though, this episode was just a stepping stone for me to get further along in the series so that I can find out what the heck is going on with the Darksaber.
Probably, you can expect a lot more Rebels reviews in the near future.