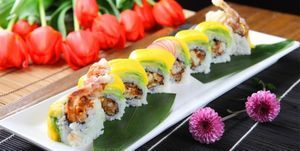 As I've mentioned recently, sushi has never really been my thing. In fact, one could say that most of my life I was very anti-sushi. I wouldn't eat it, not even if you paid me to. Though no one ever offered to pay me to, so there may well have been a price I would have taken to do that. The world will never know.

That said, all it takes is a woman to change things like that. Not any woman, mind you, just my wife. [Not that she could ever be "just" anything, but, you know...] And frying the sushi, but you can go back and look at my post about how I broke the world if you're curious. Still, even after I was accepting of sushi, I was pretty indifferent to it. Maybe that's because the only sushi we ever had (because my daughter loves sushi... hmm...? because my daughter loves California rolls) was grocery store sushi. I would take a piece if my daughter offered me one but, really, only to make her happy, not because I wanted it.

That all changed when we took our first trip to Yireh Sushi.

You might be wondering why we would even go to a sushi restaurant, am I right? That's because in our family, on a person's birthday, that person gets to pick what we have for dinner for said person's birthday. Well, within reason. Sometimes, these meals are even things that we cook at home, which is usually the case for my birthdays and, now that we make the best pizza in the city in our very own house, my younger son's birthday, too. My daughter pretty much always wants to go out, and my wife can go either way depending on the kind of food she wants to have. As it happens, for my wife's birthday about a year and a half ago, she wanted sushi.

To be clear, it wasn't that she specifically wanted sushi, but she'd read about Yireh and wanted to try it out but was reticent about it because my younger son won't touch it and I had always been, well, I talked about that already. However, for her birthday, no one would be allowed to protest or complain, so she chose Yireh for her birthday dinner.

I was blown away.

Let me put it like this:
Pretend the only pizza you've ever had is frozen grocery store pizza. Something like Totino's. 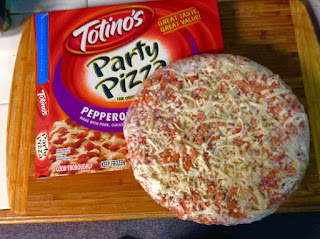 Which is fine, you know, for cardboard covered in vaguely ketchup-like sauce and whatever that is that they call "cheese." Look, all I know is that it doesn't melt. Cheese melts so that white stuff can't be cheese.

At any rate, "Party Pizza" is what you think of when you think of pizza, and you're not really all that impressed with it.

One day, though, someone takes you to a real pizza parlor. And, BLAMO!, your eyes are opened to what pizza really is.

That's what going to Yireh was like for me. I was all, "This is sushi?! This is amazing!"

A trip to Yireh is pretty standard these days when we're going to the opera. It's become the car picnic food of choice. And, well, I already mentioned (see the above linked post) how it was the food I chose for my birthday. That's fairly significant.

On top of the great food, they are run by a lovely family, and you can watch the cook make the sushi right there at the counter if you're so inclined. They knew who I was by my third trip in, and the woman who takes the orders, etc asks about my daughter (and how she's doing in softball, sometimes) every time I go in. When we went for my birthday, she brought out for my wife and I (because the kids didn't accompany us) a free order of gyoza, but, get this, I never told her it was my birthday: She was just being nice! Needless to say, we love going there.

And we all have some favorites:
For my daughter, it's their California rolls or, sometimes, their California tempura roll.
My wife loves the Ace roll. So do I, actually. It's awesome.
But I also love their Fire roll, which has a slice of jalapeno on top and I'm not actually a huge jalapeno fan, but this works really well, and I almost always get an order of one of these.
The Dragon roll is also something we get on a fairly regular basis.

We do try new things pretty regularly, but nothing has beat these.

So, what I'm saying here is this: If you like sushi, you'll love this place. You can't beat the food or the people.
And, if you don't like sushi, you should give the place a try anyway. Maybe you've just been eating "party sushi" your whole life and need to have your eyes opened.
Posted by Andrew Leon at 12:00 AM