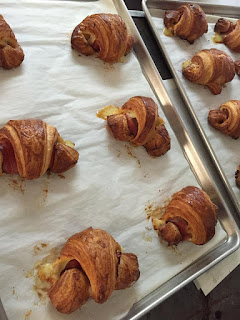 On a day in the recent past, I woke up with a craving for a croissant. On the one hand, this was puzzling, because it's not a thing a frequently want or, even, think about. On the other hand, I knew exactly why I had that craving. The night prior, my wife and I had watched the first episode of Killing Eve, during which there is this whole thing over a croissant. So I woke up the next morning wanting a croissant.

As it happened, I also had to go out that morning to take my daughter to school and put gas in my wife's car, so I decided to stop and get croissants on my way home... wherein lies the problem. There are no good croissants in the area. Many many years ago, when we wanted croissants, we'd go to this place called Cafe des Croissants. At the time, we thought they were pretty great. I mean, they must have thought so, too, since they named their place after the things! They were this quaint little place that was always crowded and had all kinds of croissants, and it was always a treat to go there.

BUT! At some point within the last decade, they decided to expand. Or they got new owners who decided to expand. I'm not sure if the new owner thing happened or not, but the pattern suggests it, since they went from one location to about six within the span of a year and, of course, when they did that, the quality of their croissants went down. Way down. They're more like fluffy bread, now, than anything else. Do you have a Safeway in your area? If so, go pick up some croissants from them, and you're getting something comparable (though only about half the size of the ones from the croissant place).

Anyway, I stopped at Cafe des Croissants on my way home and picked up some croissants, and they were fine. Which is a problem when you want a croissant. You don't want a piece of bread, which is fine; you want a croissant. And, when I say they were fine, I mean they were fine with me. My wife's reaction was somewhat less than mine, which I will sum up by saying that she didn't finish hers and gave half of it to our son (who will kind of eat anything that is bread or pizza or cookies).

BUT! All of that made her want an actual, good croissant.

Because we were going down to San Francisco this past Sunday (to see an exhibit at the Legion of Honor (from which there are no pictures, because it was a no-picture-taking kind of exhibit (of all kinds of jewels and jewelry and jeweled daggers!))), anyway, my wife did some San Francisco croissant research to see if we could find some good croissants down in the city. What she found was Arsicault Bakery.

Our plan was to get the croissants on the way to the museum, which seemed like a fine plan. Fine enough, at any rate, because we figured that even if we couldn't find parking (and you can never find street parking in San Francisco), one of us could hop out of the car and get the baked goods while the other one drove around until a pick up was needed. But that was a bad plan.

It was a bad plan because we got there and there was a line down the sidewalk to the bakery. There would be no driving around while someone hopped out and got croissants. So we looked for parking... but, as it turned out, there was a farmers' market going on a couple of blocks away, so there was absolutely no parking. Anywhere. And, maybe, the market was contributing to the line at the bakery? Or maybe not. Maybe they're always like that.

We changed our plan.
We changed it to a post-museum trip.
Which was fine except for the possibility that there wouldn't have anything left. So I wasn't surprised at 2:40 when I walked in -- alone, because there was still no parking so my wife was out driving around the block -- to find out they only had a few ham and cheese croissants left and a couple of bags of shortbread cookies. I bought a bag of the cookies and most of the croissants and dashed back out to get picked up on the drive-by.

The decision (because I was hungry) was that we would eat one of the croissants. You know, try it out. My wife only wanted some of the croissant part, so I pulled out one of the croissants in its little white bag and finally looked at what I purchased...
No, I didn't look at what I was buying when I bought it, because I was in a hurry and I already knew I was buying them. I just took the bag and paid.
...It was the most croissanting looking croissant I have ever seen. And I knew this idea of breaking off a piece of the outer layer for her was going to be a bad idea. But I reached into the bag, keeping the croissant in the bag as much as poosible, and broke off a piece of the crust... Which sent croissant flakes flying into the air as it cracked apart.

It was, by far, the best croissant I have ever tasted, and it wasn't even fresh and warm. It was amazing. And, yes, by the time we had finished it, me feeding my wife bites of the outer crust as I ate the ham-and-cheesy goodness and innards, I was completely covered in croissant flakes. There are still croissant flakes turning up in my car despite a rather thorough brushing of the seat when we got home.

Yes, we are making plans to take a trip to the bakery when we can get there early enough to get fresh goods. I can't wait!

[The above pictured croissants are from Arsicault, but I can't take credit for it. I stole the picture from their facebook page, but I'm pretty sure they'd be okay with it. I hope. Either way, you can check them out on facebook.]
Posted by Andrew Leon at 12:00 AM