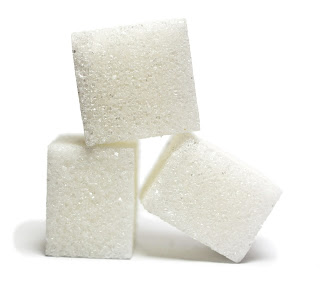 And you don't even know it.

Sure, sure, people say it (like I just did), so you have some vague intellectual knowledge that you eat a lot of sugar, but you don't know it. Not in any kind of experiential way. It's not like you're pouring sugar on your Sugar Frosted Flakes the way my friend used to do when I was a kid. Because that's just what you need on your sugar cereal, right? I'm sure you feel perfectly comfortable with your sugar intake because you're not actively participating in how much you consume.

And, you know, so what, right? So food has sugar in it; what's the big deal? It's not like it's hurting you, right? You can't even tell that it's there.

Which, actually, is the problem. You can't tell that it's there. Also, you can't tell any of the flavors of the food are there, either.

Once upon a time, I was just like "you," you being the "average" person in the US. I ate all of the packaged food and drank all of the sugarbomb drinks. And boy did I! All I drank was soda. And I didn't think there was a problem. Everything just tasted "normal."

Without getting into it, there came a time when we cut sugar out of our diet. [I'm sure I've got old posts about that, if you want to go look for them. Or maybe I don't. I don't remember.] It wasn't until after the sugar was gone that I realized how much flavor food has. No, seriously, actual flavor textures and complexities. And some things were sweet that I had no idea about. Like carrots! But when you eat sugar all the time (and you do), by comparison, a carrot is not sweet. In fact, it's just kind of crunchy and flavorless.

Bell pepper was my big surprise. It's not a food that I had ever really liked, because, compared to sugar, it's an even more crunchy, flavorless, even kind of bitter food than carrots. But that's totally wrong! And bell pepper has different flavors depending upon what color it is, which amazed me. AMAZED! Red is my favorite, followed by yellow. Orange is okay, and I tend to stay away from green. It's not that it's bad, but it's nowhere near as good as the other three.

It's not until after you quit eating all of the processed crap full of sugar that you can taste all the flavors in real food and realize that the processed stuff is basically flavorless other than a vague flavor of sweetness. Sometimes with salt. It's more than slightly disturbing. I can't drink soda anymore. It's so sweet as to be disgusting. And kettle corn (because they always have that at the fair or any other kind of crowded live event thing)? The smell of it (just the smell of it alone!) is so sweet that it makes me sick to my stomach. But that's only because I don't consume sugar all the time, because I used to think it smelled good.

It goes without saying, not even talking about the health implications, that I think "you" should probably cut sugar out of your regular diet. Not only will food taste better, but you'll actually be able to appreciate the things you eat that have a need to contain sugar (like homemade cookies). [Yes, chemically speaking, some things need to contain sugar.]

Of course, I'm not talking about sugar at all but about the trashy media you put in your brain that works the same way as sugar. (Not that I don't mean what I said about the sugar, too, but I think that's a better way to illustrate the problem than trying to talk about what you entertain your brain with.)

Not that the Left is completely blameless, but the adding of "sugar" to what you watch is something the Right has kind of turned into an art form. Starting with Fox news way back in the early 90s, they have constantly and consistently been covering the flavor (truth and facts) of what they present with sugar (falsehoods and propaganda). It skews your view of reality when you can no longer tell what is fact from what is not.

When I quit eating sugar, I almost immediately lost a lot of weight. "Effortlessly," as it were. I didn't have to go out an exercise or try or anything. Other than whatever "trying" went into not eating sugar, which wasn't as difficult as it sounds. BUT!
People asked me frequently how I lost all the weight, and I would say, "I quit eating sugar," and, without fail, they would respond, "Oh, I could never do that."

Fuck that shit! I grew up drinking nothing but soda, nothing!, and I quit. And it wasn't really all that hard. Ahead of time, I thought it was going to be hard, but, upon doing it, it was really pretty easy.

TV and media is kind of the same way, mostly in that you have to find something to fill all of that time with that you currently spend immersed in your sugarcoated media world designed exactly to keep you consuming it. And to keep you from thinking about how much of it you're consuming or, really, thinking at all.  Like sugar, see.
"Don't bother thinking for yourself; we'll tell you all the thoughts you need to have."
It's more than a little disturbing.

It's amazing, though, how much easier it is to see the lies when you're not ingesting them all the time. Of course, church doesn't help with any of this, because church sort of pre-programs people to believe fantasies, fables, and mythology as fact and truth. But that's a story for another time...
Posted by Andrew Leon at 12:00 AM