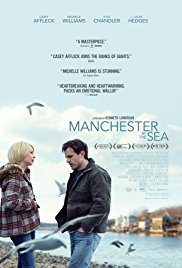 This was supposed to be one of those great, underappreciated movies, right? Right? One of those movies that only the Academy can appreciate because all of the rest of us are ignorant, low class plebeians. Right?

Unfortunately, it's kind of true. Kind of. Because it is the kind of movie that only entitled white men can appreciate, and it's only because the Academy and other award agencies are mostly made up of entitled white men that this movie received any recognition.

This movie can be summed up in exactly one word: BAD.

The fact that it won the Oscar for best original screenplay is a travesty and can be summed up by the fact that it was written by a self-involved Boomer for other self-involved Boomers, i.e. entitled white men. I can't really argue Casey Affleck's best actor win because he was the only thing that made the movie at all watchable. I think it must take an amazing talent to bring such a lifeless, flat script to any kind of life at all. Or it could just be that the self-involved white male Boomers felt sympathy for the despicable character of Lee Chandler.

But Lee Chandler is an example of bad storytelling. The problem here is that we are, actually supposed to feel sympathy for Lee Chandler. Obviously, he has suffered some tragedy and doesn't know how to cope with it and it has driven him into isolation. On the surface, sure, he seems like a sympathetic character. But as the movie progresses and we find out what happened, we find that he's just an asshole full of self pity.

In a nutshell, it's like this:
Lee's brother dies and leaves his kid to Lee in his will. His teenage son. Yes, that's almost exactly how it happens, and I'm pretty sure you can't do that, but let's pretend there are no issues with that bit. Lee doesn't want the kid and is pretty much an asshole about the whole thing, including getting into bar fights with little to no provocation. Of course, the movie opens with Lee being an asshole before we find out about his brother, so the death of his brother has nothing to do with the asshole-ness.

Oh, wait, suffered a tragedy, right? Well, as the backstory gets filled in, we find that Lee was also a flaming asshole before that tragedy occurred and that the tragedy occurred because of his asshole-ness. Lee was the kind of guy who would come in while is wife was sick in bed with a fever and force himself on her after she'd said she didn't feel like having sex -- 104 degree fever, snot running out of her nose -- but Lee said he wasn't bothered by her being sick so it was okay and, so, she lets him do it.

I have a huge problem with that scene in the movie, but not because I disbelieve that she might have let him do it. It's the kind of thing where a woman might give in because it would take too much energy -- remember, she's sick! -- to say no, but they played it off as an "aw, shucks" moment. "Aw, you're just so cute when I tell you no and you won't listen. You know what, you go ahead and fuck me all you want, because me saying no really means yes." It's the kind of situation where an entitled white guy would totally expect to get his way for the sake of "white-guy-ness." It made me kind of sick, certainly disgusted. This is the guy you want me to have sympathy for?

But it gets better! Or, you know, worse, because they go on to show his asshole-ness in all its glory. Lee has a gathering of his white male friends over. They're in his... I don't know... his man cave? It's the basement room of his house and has a pool table and "man" stuff. There's probably like 10 of them, and they are all drunk and loud. Which is fine, I suppose, until we find out its 2:00am and they're keeping the whole house awake: his wife and his two young children. Lee and his buddies think it's funny when Lee's wife comes down and demands that they all leave. "She can't talk to us like that!" Even though they do. Eventually.

Lee is a self-involved, entitled white male asshole. He suffers a tragedy that he causes and, rather than use that situation for self-reflection or something beneficial, he continues to be a self-involved, entitled white male asshole. The death of his brother does nothing more than to give him greater opportunity to spread that asshole-ness around.

Then there's the kid: Patrick. He seems to take after his uncle (Lee) rather than his father, because he, also, is a self-involved little asshole who seems to be more annoyed at the inconvenience of his father's death than anything else. "Seriously, Dad, I'm busy trying to fuck my multiple girlfriends and your death is really getting in my way." He's a shit of a kid, and there is plenty of evidence in the movie that he's just a shit of a kid and not being one because his dad died. Like, evidently, he likes to start fights with his hockey teammates and is in trouble for that frequently. And I mentioned the multiple girlfriends, right? That he keeps hidden from each other because none of the girls in question would be cool with the way Patrick spreads the "wealth" around.

Look, it's okay to fill your stories with despicable characters, just look at Rowling's The Casual Vacancy, but you need to know they're despicable. Trying to write a complete asshole as a sympathetic character only serves to display your own asshole-ness, rather like Trump (#fakepresident) and his constant "woe is me" diatribe about how he's the one being persecuted rather than the one doing the persecution. Having your asshole actions pointed out is not, contrary to the belief of assholes, persecution.

The most unforgivable part of the movie is the ending. Lee's ex-wife -- His ex-wife who is married, now, to another man and has just had a child with him (I think? I can't remember now if she'd given birth by the end of the movie or not.). -- comes to him to tell him how she forgives him for causing the death of their children (the unspeakable tragedy) and that she's still in love with him...
What the fuck?!?!
I'm sorry, but this is the exact the same situation as her being in bed sick and telling him that she doesn't want to have sex. "Look, I know you burned up our house and killed our kids because you were busy being a drunk asshole, but, really, you've punished yourself too much and too long, and you need to move on; after all, I forgive you. Oh, and yeah, I'm still in love with you and never stopped loving you. Even though you killed our kids." In other words, "Aw, shucks, you're just a lovable white guy who shouldn't be held accountable for his actions, so stop punishing yourself."

To put it mildly, there was nothing I found redeeming about this movie. That anyone found the character of Lee Chandler to be sympathetic boggles my mind but, then, the entitledness of the Baby Boomers often boggles my mind. And, yes, the writer of the screenplay is solidly a Boomer. And a white male.

So I'm just going to put it out there: The protagonist in your story generally ought to be sympathetic in some way to the audience. Or you need to have the awareness that your characters aren't sympathetic and be using them to some other purpose. You should not, however, try to pawn off your asshole characters as somehow being worth our sympathy. That's just gross.
Posted by Andrew Leon at 12:00 AM