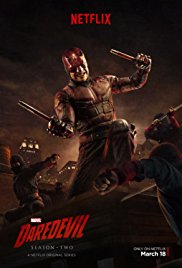 The key to Marvel's success has always been integration. That was the heart of Stan Lee's original vision for the "universe," a place where all heroes (and us) existed simultaneously and, therefore, could interact with each other in one cohesive existence. It was a radical new approach to superhero comics (and one that DC still has not figured out, having had to relaunch their entire universe as recently as 2016, the second time they've done that this decade). Marvel has continued to model this initial idea throughout their history, carrying it into the MCU and to their various Netflix series.

And, yes, I know I'm a little late to the whole Netflix game (as far as reviews go), but I don't watch a lot of TV and never binge, so it takes me a while to get through these shows. However, now that I've finally finished The Defenders, I figured it was time to weigh in on the MNU (Marvel Netflix Universe); as such, this will be more like thoughts rather than any kind of review.

Daredevil: Overall, I thought Daredevil was great. It has the gritty feel of the Frank Miller era of the character with all of the struggles that come with that. They gave the series the right feel to make it believable as existing just beneath the MCU, beneath in that what's going on with Daredevil and his associates is beneath the notice of the "bigger" heroes dealing with global issues. And Charlie Cox is great in the role.

They also managed to avoid what was probably the biggest potential pitfall of introducing Daredevil as a character: the Hand. Despite the fact that this is a superhero show, this isn't the 80s anymore, and a secret organization of ninjas is actually less believable than a Norse god with a flying hammer or a guy who turns into a big, green rage monster.

What they didn't do well was the Kingpin, which is why I have to say the show is "overall" great and not just that it's a great show. Vincent D'Onofrio is wretched in the role, a whiny man-baby. Maybe it's not his fault; I'm not familiar enough with him as an actor to know if it was him or the writing or directing. What I know is that the Kingpin of the TV series is a pale reflection of the Kingpin of the comics, and I hated him. Not in a good way. It made me wish for Michael Clarke Duncan; now, there was a real Kingpin.

Then there's the Punisher... What a controversial character for our time. For all times since he was created, actually. The Daredevil/Punisher conflict is classic, and they did a great job with the introduction of Frank Castle and making him an appropriate anti-hero to go along with Matt Murdock.

Jessica Jones: A good, solid series. I like the character, and Krysten Ritter does a great job with her. David Tennant was fantastic as Kilgrave, as fantastic as D'Onofrio was un-fantastic. Of course, I'm also biased as Tennant goes: He was the second best Doctor ever. It was also nice to see the re-emergence of Carrie-Anne Moss.

But I don't thin they handled the story as well in this one. Strong start, wobbly finish. Don't ask me what about it; I don't, at this point, remember. Look, mind control is a powerful ability, maybe too powerful for what they were working with. It just felt like some of what they were doing toward the end of the series was... a little tenuous at best.

However, Mike Colter was great as Luke Cage, and I thought it was cool that they introduced him in this series.

Speaking of
Luke Cage: I wanted to like this show much more than I actually ended up liking it. Which is unfortunate because, as I said, in Jessica Jones, Mike Colter was great. And, actually, again in The Defenders, he is great. But in his own show...?

Okay, to be fair, I don't think it's him, because the problem was with all of the actors, which means, probably, the problem was with the director. Everyone had this slow, overly enunciated speech, so much so that it was distracting and felt unnatural. It's not at all how Colter delivered his lines in either Jones or the Defenders, so it was something specific to the Cage series. Erik LaRay Harvey suffered from it the most. He became unbelievable as a villain.

And he was already unbelievable as a villain, which is not to say that he was precisely unbelievable, but he was so cliche -- the out-of-favor half brother -- as to be unbelievable.

None of which is to say that I didn't like Luke Cage, but, by the time I got around to watching it, so many people were talking about it as if it was the best thing ever that I expected more out of it.

Having said all of that, Simone Missick was great as Misty Knight, though that was countered by Mahershala Ali being wasted in his role.

Which brings us to the apparently reviled Iron Fist.

I'm going to admit that I don't really understand the intense negative reaction to this show. It feels like one of those things that everyone decided not to like before they actually watched it, the reverse of everyone deciding they loved Luke Cage before they actually watched it. It's not that I don't understand that on the surface the show looks like just another rich, white super hero but, really, Iron Fist is much more nuanced than that. Which I don't want to get into because I'm not defending some white superhero.

So, yeah, I liked the show.

And, man, I really want there to be some kind of Power Man and Iron Fist series, even if that's not what the call it.

Hmm... also, they really develop the Hand in the Iron Fist series which sets us up nicely for
The Defenders: Once again, Marvel shows us that they are the masters at taking disparate threads and drawing them together into one cohesive story. It's nice to see all of these characters come together, and not just the heroes, the side characters, too. In fact, it's the side characters who, in many ways, breathe real life into all of these series: Claire Temple, Foggy Nelson, Karen Page. Stick.

Also Trish Walker and Misty Knight. I don't want to make it seem like it's only the Daredevil side characters I like. They just came first and have woven themselves through many of the other series as well, especially Claire. And Rosario Dawson is really good in the role.

So they pull all of these characters together and manage to mostly avoid the cliche "hero meets hero and so must fight"... but, well, where that does happen, it really works. Really. And that's all I'm going to say about that because I don't want to be all spoilery for anyone who is farther behind than I am.

So they pull all of these characters together to, of course, face off against a menace that no single one of them could handle alone. They do it well. The first half of the series is brilliant. Which brings us to the only weakness of the series: This conflict has been building and building through several of the other individual series and, then, it's just... over. It felt too abrupt to me. Too quick and easy. Not that it was easy, but... Yeah...

It's probably just me.

But, overall, still great. I'm looking forward to more.
Of all of it.
I can't wait to see where it goes and what other characters come in.

What Marvel is doing with Movies and TV is actually kind of amazing. The kind of thing that was said could never be done because the audience would never go for intricate, in depth, long term stories. I think it was probably just the (old, white) executives who couldn't understand intricate, in depth, long term stories. All I can say is that it's about time.
Posted by Andrew Leon at 12:00 AM