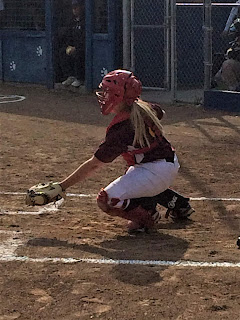 Did you ever have a teacher you loved? No, I don't mean like had a crush on; I mean one of those teachers who changed your life in some fundamental way. It's like...
It's like you're staring at a wall -- we'll call it the blackboard -- and all of the teachers you've had so far keep encouraging you to stare at that wall and nothing else. Just stare at the wall, don't question, don't cause problems, and, most of all, don't question. Then you have a teacher who comes along and opens the blinds on the windows and tells everyone to come look outside, and it's amazing! You didn't even know the world was out there.

I loved him in a way that only a child can love and, when 6th grade was over, I was devastated. On the last day of school during our last-day-of-school party, I threw my arms around him and cried, cried deep, wracking sobs that have only ever been worse for me when my grandfather died.

I could write a lot more about Mr. A. and learning the difference between a hypothesis and a theory and doing actual experiments and using a computer for the first time, but this isn't about me. This is just to show the depth of connection we can come to have with people who open our eyes and our worlds.

My daughter fell in love with softball the first time she "played" it, just playing catch with the neighbor girls as they were practicing for the team they were on. She had to join, too. So we signed her up. All was good.

Kids' sports leagues are a mixed bag. You have to pay for your kid to be able to play, of course, but, for that money, you get someone who is volunteering to coach. In softball, this was inevitably the pitcher's dad, because, inevitably, the pitcher's dad was forcing his daughter to play and wanted to be the coach of the team so that he could make sure his daughter got to pitch. Even if there was someone better at it on the team. Mostly, these guys were not very good coaches.

In fact, most of the were pretty shitty coaches, at least as far as the team was concerned. The problem was that most of them were also pretty shitty people. You can be a bad coach (as in not being very good at coaching), but it takes a special person to be a shitty coach. The shitty coaches were all what we call "yellers," which means pretty much what it sounds like: Their method of coaching was to spend their time yelling at the girls when they made mistakes.

It got to where my daughter was not enjoying softball anymore, this thing that she loved.

One of the only things we were able to tell her through all of that was that it would be better when she got to high school because:
1. The coach would not be someone coaching because his daughter was on the team. It would be someone coaching because he was being paid to do a job. No more nepotism.
2. Being on the team and getting to play would be because of your skill rather than who your dad was. Again, no more nepotism.

And, hey! My daughter is in high school, now. A freshman. She did try out for softball, and she made the varsity team. The only freshman on the team. Not just did she make the team; she's a starter.

Of course, she could have still gotten bad coaches. Shitty coaches. We've come across a few of those in the games this year. Or, even, shitty people as coaches.
But she didn't.
She got a pair of great coaches who coach through encouragement. They let them know what they're doing well and what they need to work on. Neither of them has yelled at any of the girls during a game all season. The same cannot be said of coaches on other teams.

My daughter loves softball again. This year has been a world-changing experience for her. I have to think it's been for her like 6th grade science was for me. It's a whole new world. Softball with a genuinely positive environment, even when they lose.

And, due to circumstances, it so happens that both coaches are having to leave at the end of this year.

And, well, so am I. For her. Because I know how that feels.

Worse, I know that there's nothing I can do to make any of it better.

So my hope is that she will hold onto this moment and take what she's learned from this experience and carry it forward with her as she goes on in life, whether that be in softball or not. I mean, I wouldn't trade my 6th grade science experience away for anything, even though it hurt when it was over. That pain was more than worth the experience of the whole, so I hope she will be able to cherish this freshman year of softball and look back on it as a fundamental moment of growing up. I suppose it's that whole better to have loved and lost thing.

I guess that's all any of us can hope for. 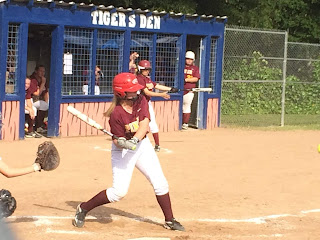 If you look to the right center in this picture; you can see the ball coming in.
This was a nice hit but, unfortunately, it was caught.
Posted by Andrew Leon at 12:00 AM