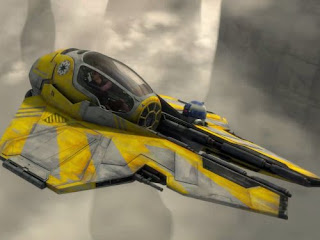 -- Sometimes even the smallest doubt can shake the greatest belief.

This episode, things get real.

No, I mean really real.

One thing we know, people (populations) don't like wars. It doesn't matter how "just" or "right" they are, over time, people want things to be back to normal and to not be involved in wars. Though Clone Wars has toyed a bit with how the common man has reacted to the war going on around them, "Sabotage" makes it real. It brings it home to Coruscant and how the citizens not actively engaged in the fighting are reacting to the war and the clones and the Jedi. It's not good.

There's a definite faction building that is actively protesting the war that's going on and the Jedi seem... Well, more than anything else, they seem baffled by it. They've spent so long never having their authority questioned that they don't really know how to react to the people who are turning against them.

So there's an incident, and the Council decides to call Anakin and Ahsoka back to Coruscant to deal with the investigation since they're obviously innocent of what happened. Because, see, the sentiment is that a Jedi may have done it, so none of the Jedi who were on Coruscant can be trusted.

Of course, then Mace Windu assigns a droid to work with them on the case and no one stops to think about whether the droid, the droid assigned by one of the Jedi who had been on planet when the incident happened, can be trusted. I found that kind of amusing.

At any rate, if I'm remembering correctly, this is a real turning point in the series, and you can tell that the tone of the show was really changing to something a little more dark and a little more serious and a little more great... just to have its plug pulled because Disney bought the Star Wars franchise and didn't want one of their shows on some other network. And, while I can understand that, still, screw you Disney!


"Fear makes even the most trusting individual... irrational."

"There are going to be Jedi who disappoint us..." -- Anakin Skywalker
Posted by Andrew Leon at 12:00 AM