With or Without U2 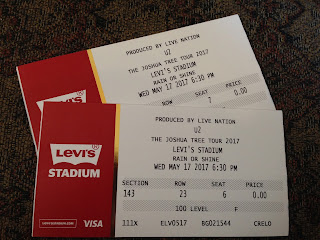 There are moments in life that define us, shape us, turn us into people we wouldn't have been if those moments hadn't happened. Sometimes, we're lucky enough to recognize those moments, and appreciate them, as they are happening (as I did when I came out of seeing Star Wars when I was seven years old; I knew I was not the same person coming out as I had been going in), but, usually, it's not until later, if at all, that we realize those moments happened.

I had another of those moments in the spring of 1987. It was soon enough after the release of "With or Without You" that none of my friends knew what the song was or whom it was by. I know, because it came on the radio one Wednesday night after youth group as we were hanging out in the church parking lot. It's not surprising that I didn't know the song or the group, because it came on the local rock station which wasn't the kind of music I listened to at the time. However, the song instantly captivated me, but the DJ didn't name the song when it finished playing, and none of my friends knew what it was or, even, seemed to care much, but it was the beginning of what I can only fairly call an obsession with me. Not with the song, with the group.

U2 was music of a kind I'd never heard before, but I suppose, having been raised on 60's protest music (Dylan; Peter, Paul and Mary, Simon & Garfunkel), that it should have been no surprise I would gravitate so heavily to them. Within a few weeks, I had copies of all of their music, and they had become "my" band.

I have this cousin who's a few years older than me and who lived in Dallas at the time. He was a theater guy and had gotten involved in theater production work after high school, and one of the things he did was help do stage setup for bands coming through Dallas/Fort Worth. He gave me a call on November 20 or 21 letting me know that he was going to be working on the stage for U2 and had backstage tickets; all I had to do was get there.

Backstage passes for The Joshua Tree tour! Can you imagine? So, you know, I asked my mom, because I didn't have my driver's license yet, and I don't think she'd have let me drive to Dallas by myself at the time even I had. Or maybe she would have, I don't know, but it didn't matter since I didn't have it. Her initial response was "yes;" after all, Dallas was less than three hours from Shreveport.

By Sunday, though, she had reconsidered her willingness to drive me to my cousin's house and spent the day laying a heavy guilt trip on me about how I was shirking my responsibility to work on Monday night as I was scheduled to do. And Tuesday night. There were concerts on both Nov. 23 and 24, and I could have gone to either or both. All I had to do was get there. But, you know, I was supposed to work, and, if I went off to do something so frivolous as going to a concert --because it was Thanksgiving week -- I would leave my church with no one to cover for me... other than her.

She spent all of Sunday reminding me of how irresponsible I was being and, by Sunday night, I broke down and called my cousin and told him I couldn't come.
And that was that.
I never really got over it. I mean, here I am, 30 years later, writing about it, right?
That, too, actually, was one of those defining moments, but one that went unrecognized by me for many, many years. You do try to dismiss major disappointments like that as being unimportant, after all.

I never really did the whole concert thing when I was growing up, not mainstream concerts of the type you think of when someone says "concert," at any rate. [I did see lots of Christian bands, but that was a different kind of thing.] After the whole thing over U2, I decided somewhere internally that concerts weren't worthwhile and were a waste of time and money. After all, if I couldn't go see U2 because they were frivolous, what was the point of spending money on some other band?

All of that to say, when my wife saw that U2 was doing a 30th anniversary tour for Joshua Tree, she knew she had to take me to it. Above any objections I might raise. So she made it my birthday present, and it's really hard to say no to that. And I'm glad I didn't, because...

Here's the view from our original seats: 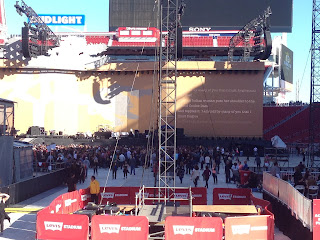 BUT! These seats had an obstructed view. You might ask of what, because that's what we asked when they came to tell us and offer us new seats... 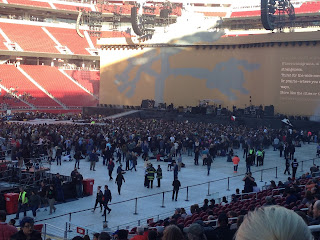 And now you can see the OTHER stage that we didn't even know was there! And these seats were closer, so it was a win/win. For us! 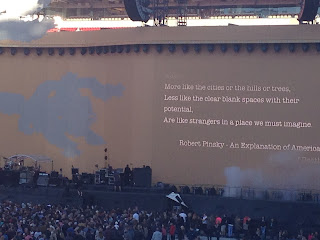 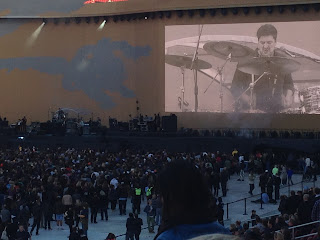 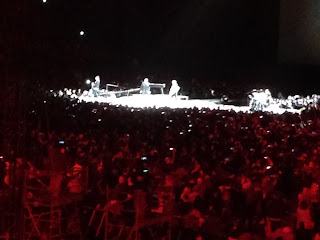 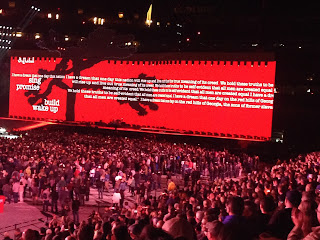 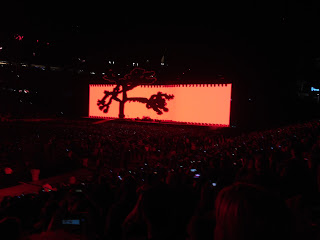 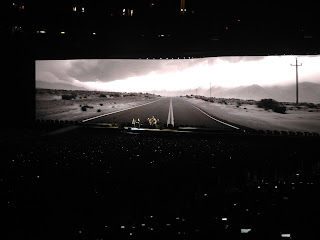 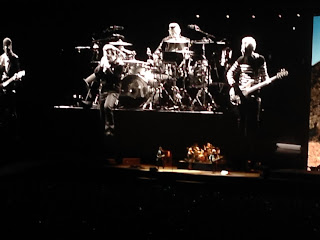 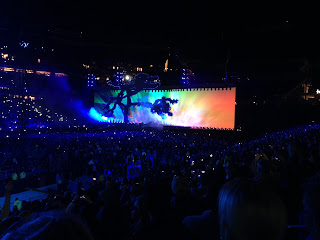 The only thing that could have made it better is if they had closed with "40." Maybe next time.
Posted by Andrew Leon at 12:00 AM