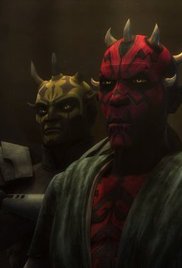 -- One vision can have many interpretations.

You know in comic books how every so often all the bad guys will get together to take down the super hero? You know, like the Sinister Six in Spider-Man. Or all the time in Batman (okay, not really, but it sometimes seems that way). Oh... You don't read comics? Well, it's a thing, the bad guys teaming up. This episode is like that.

After barely escaping with their lives last episode, Maul and Opress are picked up by Death Watch. That's a match made in Hell if you're Obi-Wan Kenobi, because, really, there's no one around who hates him more than Maul and Pre Vizsla.

But the fun doesn't stop there! No, Maul hatches a plan to raise an army... from the criminal underworld! We have what I think is the first appearance of Black Sun in current Star Wars canon material, having first appeared in a 90's era video game which I can't remember the name of and don't feel like looking up. There's also the Hutts. And more.

This episode has a lot of action but also a lot of development. It's exactly what Ob-Wan was warning about at the end of "Revival," a warning that really went unheeded because of his "vested interest" in Maul. No matter what happens -- and I'm not saying what happens -- it can't be anything good.


"After careful consideration, we will join you."
Posted by Andrew Leon at 12:00 AM