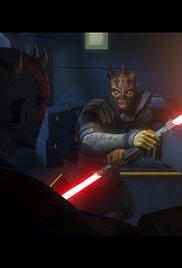 -- Strength of character can defeat strength in numbers.

For any of you following along with both the Squid and me, you will have noticed that our episode recaps have been off by a week since season five began. This is the episode why that is so. See, season four ended with an arc involving the return of Darth Maul, and, I guess, they felt like they needed to air a Maul episode to start season five to give people a feel of continuity, but this episode doesn't belong at the beginning of season five as it is the beginning of a new story arc and belongs in the here, as they placed it in the DVD collection.

So, yes, we are beginning a new Maul/Opress arc.

This episode features Hondo and would have been good without him, but he makes this episode even better. He said so many great lines, I couldn't choose just one to include, so you're getting THREE Hondo quotes below!

The episode also features the death of a Jedi, and not one introduced just to be killed off. The Jedi in question has been featured in many episodes of The Clone Wars and also appeared in, I think, two of the movies. It's kind of a big deal, I suppose.

That's really all I'm going to say about "Revival," which, I know, is pretty close to nothing, but the Maul story line seems to pretty important seeing that he's been carried over into Rebels. Not that I've seen those episodes, yet, since I still haven't managed to start watching season two. Let's just say that the episode is about Obi-Wan's vested interest in seeing Maul return to the land of the dead. The astute of you out there will know how that turns out.

"Well, that settles it. Those traitors are no longer my men. I want their tongues!"

"Insolence? We are pirates! We don't even know what that means!"
Posted by Andrew Leon at 12:00 AM