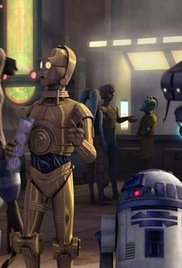 -- A failure in planning is a plan for failure.

This episode: Padme throws a party!
Which I don't know how I feel about. I'm sure it wasn't intentional, but it seems so sexist to have Padme be throwing a party. A party that just has to be perfect. And she's fretting over it. It seems so cliche.

That's not really what the episode is about, though. It's just an excuse for the droids, R2 and 3PO, to get sent on an errand... so that they can be captured by Cad Bane. Yea! Cad Bane is back! But not really enough in this episode since the action centers around the droids.

The problem here is that Bane is, basically, waiting for the droids so he can capture them, but he had no idea they'd be sent on an errand unaccompanied, so the logic here doesn't work for me.

Nor do I find it believable that R2 just takes off for a droid spa treatment.

[And this is where I got interrupted while writing this and lost my train of thought.]

At any rate, there are a lot of little details like that that don't work if you think about it too hard (or at all), but, still, I liked the episode well enough. I find R2 and 3PO together enjoyable, and there really isn't much of that in Clone Wars. It was a nice diversion that also is setting the groundwork for the next episode.