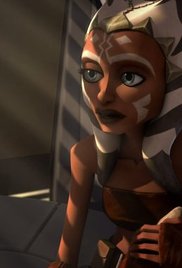 -- The future has many paths: Choose wisely.

Remember when Aurra Sing died? Yeah, me, neither, because, as it turns out, she didn't die. Which is why I was rather confused at the end of "Lethal Trackdown." I kept thinking, "I don't remember her dying." Because she didn't, and, now, she's back. Thanks to Hondo.

The episode itself is about an assassination attempt on the life of Padme, or, more specifically, Ahsoka's vision of said attempt. Or Ahsoka's vision of Aurra Sing. Well, let's just call it an episode about learning to trust yourself and your own instincts.

Now, I want to take a break from the episode itself for a moment:
I sort of hate the whole "trust yourself" or "trust your instincts" message. That's what it is: a message. And it's a message that has pervaded our society. For instance, a new study has shown that young, first-time mothers, especially teenage ones, are more likely to trust their instincts than the recommended scientific advice when it has to do with their babies; as a result, infant deaths due to things like suffocation are on the rise. The mother just felt like the baby needed that fluffy blanket despite the fact that it's a suffocation risk. It's that whole, "My opinion is as good as your fact," thing, and, well, it's not. Sure, you're entitled to believe in whatever stupid thing you want to believe in, but it doesn't make it valid just because you believe it or because your instincts tell you it's what you ought to do.

Having said that, trusting one's instincts is valid for a Jedi, because a Jedi has the Force; we, however, do not. There is a distinct difference between believing in oneself and doing whatever it is you feel is right in any given moment.

So, yeah, Ahsoka has to learn to trust in herself and her visions... and Padme's life hangs in the balance.

It's a good, solid episode with some teaching from Yoda, since Anakin's off on a mission in this one.
Posted by Andrew Leon at 12:00 AM