Truth is the greatest enemy of the small minded. --me

Back in January, I wrote this post about... Well, you should probably just go read it, but the short of it is about being more offensive, in both connotations of the word:
1. tackling subjects that tend to upset people (hence my current series on racism)
2. not backing down from a fight or, in other words, going on the attack
I think this post will do both of those things.

I get that authors reviewing other authors is loaded topic. Honestly, I'm tired of talking about it. I believe what I believe about it, views which you can find scattered through numerous posts on here, and it's not likely that you're going to change my mind about it. I'm going to add one further thought, though, that I don't think I've stated before:
Authors reviewing authors is a longstanding practice. What do you think it is when a publisher solicits blurbs from authors for book covers? Those are encapsulated reviews meant to support, usually, a newer author and help sell books. And, sure, they pick the good ones, because they want people to buy the book. It doesn't change the fact that "negative" reviews are just as valid.

Go back and read part one of this (if you weren't here last week) if you want my full take on the subject.

All of that said (including the stuff in the older posts), and no matter what your opinion is on reviewing, here is a thing that is never okay: It is never okay to threaten someone with a negative rating/review in order to elicit a positive one in return.

So here's what happened:

I recently reviewed Lyon's Legacy by Sandra Almazan. Now, Sandra is someone I "worked with" on the mostly abandoned Indie Writers Monthly project. [I say "worked with" in that I never actually worked with her other than that we both contributed to the same blog. It's only "working with" in the very loosest of ways since we all contributed individually and never really worked on any joint projects other than the magazine, which Briane coordinated, so I only worked with Briane on that.] However, what I think of a book I read has nothing to do with whether I know the person or not. I'm reading a book then reviewing the book I read, and none of that part of the process has anything to do with whether I know you. [The only part where knowing you comes into the equation is that I am much more likely to read your indie book if I do know you. Once I've picked the book up, though, none of that continues to matter. It's all about the book at that point. (As it should be.)] I happened to not like this particular book (but you can go back and read the review).

As it happened, Pat Dilloway (also part of the IWM group) had posted a review of "Tiberius" (one of mine) about a week before I posted my review of Lyon's, or, at least, that's when I noticed it. It was a review he just slid in there without ever mentioning it to me. It was a short, respectable review with a 4-star rating.

However, as soon as my review for Lyon's posted, Pat attacked it and changed the rating he'd given "Tiberius" to 1 star. To be honest, that pissed me off. Especially when he told me that he would change it back if I would either pull down my review of Lyon's or change it to be favorable. In short, he tried to extort a positive review from me by preying on what he assumed would be my fear of having a negative review on one of my books. That pissed me off some more. That's playground bully behavior.

Needless to say, I didn't change the review.

Now, I understand that some of you feel that negative reviews are... inappropriate, but, again, I'm going to say to go back and read part one of this to get my full thoughts on that.

At this point, the thing that actually makes me mad is the hypocrisy of Pat Dilloway and his supposed belief that indie writers should only give other indie writers positive reviews because "selling books is fucking hard." And, you know, he's right; it is hard. But lying in book reviews/ratings for what can, at best, only be a short term gain (and usually isn't even that) hurts everyone in the long term. There's no better way to convince readers to stay away from indie books than for indie writers to lie in their reviews/ratings just to get the same favor back. Which is Pat's goal, as he fully admits:
"I do it because I'd want them to help me should I ask for it."
Just to say it, I don't help people for the goal of getting them to help me in return. That's not called "helping;" that's called "quid pro quo." If I'm going to help someone, I'm doing it either because it's the right thing to do or because I just want to help the person, not because I'm trying generate future favors. But I digress...

We're supposed to be talking about hypocrisy.
Dilloway's stance about only giving positive reviews to other indie authors goes back years. At least as far back as when I first declared my policy about honest reviews. Since then, however, he has been in at least one feud with an indie author he said he considered a friend and to whom he gave a 1-star review. I suppose it must be one of those things where it's okay for him to do it but it's not okay for anyone else.

I've seen him give 1-star ratings to indie authors where he admitted to not reading the books. I think those were all "revenge ratings," though, so I suppose that makes it okay. Which would apply to what he did to me.

He gave a 1-star rating to a recent ABNA winner, an indie author, but I suppose the fact that the guy won a contest and got a pocket full of money from it then got an Amazon publishing deal made that one okay. Here's what he had to say about:


Just last week I gave 1-star to a book being published by Amazon.  And you know what, it won't fucking matter!  That book has hundreds of reviews already; mine is just crying out in the wilderness.  There's no harm to it.


Oh, and he also gave Alex Cavanaugh a 1-star rating on his book Cassastar for the sole purpose of not liking Alex.

All of that to say that Dilloway actually has no standards about whom and how he reviews and rates; he throws them out based upon his mood. You just better hope to never end up on the wrong side of him, because he may just go toss a bunch of 1-star ratings at you for not liking you. Kind of like this guy: 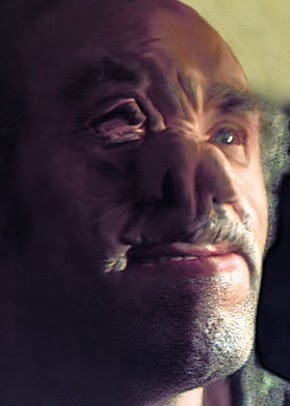 The best part, though, was that Dilloway presented what he did like this: "...I changed an overly generous 5-star review of his book to 1-star to let him have a taste of his own medicine." I love the phrase "his own medicine." If he paid attention at all to anything that I do or say, he would understand that my medicine is to read a book and offer a rating and review based upon my experience of the product. My medicine is never to go over and give someone a bad review because I'm mad at him. A more accurate way of putting that would be for Dilloway to just admit that he was giving me his medicine. Or, more accurately, his brand of poison.

On the other side of all of this is a post that Briane Pagel posted. I strongly recommend that you go read his post. Yes, it's long, but it has a very interesting take on the two sides of this controversy. Not the controversy between me and Dilloway but the controversy about reviews in general and whether we should just give out positive reviews to fellow indie authors. In that post, he excerpts from several reviews I've given his stuff. Um... He excerpts negative things I've said about his various books (and I like Briane's stuff!). More interestingly, he talks about how me pointing out the negatives in his writing helped him to grow as a writer. You should just go read the post.

I suppose the question, the real question, is "How do you deal with people like this?" The first way is what I'm doing here: You shine a light on the bad behavior. Of course, he has a belief that I behaved badly by giving Lyon's a negative review, and it's his right to say that he doesn't believe indie authors should be truthful in their reviews of other indie authors as long as it's "supporting" the author in question, but that's a far different thing than going around downgrading ratings of authors' works because you don't like them or because you're mad at them. Basically, you should let people know of whom they should be aware, so I'm letting you know.

The second way is to not let these kinds of people bully you. You don't adjust what you're doing to accommodate them, because, once you start doing that, you can never stop. It's like negotiating with terrorists. There's a reason we don't do that.

The third way is to show support for each other when someone is faced with dealing with a down-rating bully. So, you know, if you want to help out, go pick up one of my things (specifically "Tiberius" in this case), read it, and leave an honest review/rating. Seriously, I'd much rather have an honest 1-star rating than someone just giving me a 4 or 5 to be "nice" or to, hopefully, garner my favor for the future.

[Next week, I will actually have a review of one of Dilloway's works, something I read way back and never reviewed because I didn't, at the time, want to get into it with him, knowing how he is. But, then, I suppose that was a bit like trying to slide by the notice of the playground bully, and no one can do that indefinitely, because you can't ever tell what will set one of them off.]
Posted by Andrew Leon at 12:00 AM