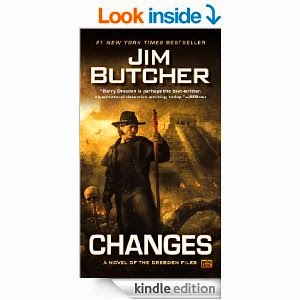 For those of you unfamiliar with The Dresden Files, you do not want to start with this book, book 12 in the series. While each book has an intact story that doesn't exactly require the previous books to understand, there is so much back story built up that, even though Butcher does a fairly decent job of quickly filling in details about past events/people, a lot of the context will be lost. Besides, it's a good series and, if you want to read them, you should just start at book one, Storm Front.

If you've been around for a while, you'll know that book 11, Turn Coat, was the first of the Dresden books that I haven't been in love with (or extreme like). And, wow, it was enough to allow me to go a whole year before picking up Changes. I thought about it several times over the past year but, every time I did, I decided to go with some other book. I suppose a streak of reading books I didn't enjoy much prompted me to go ahead with book 12.

The first thing I will note is that the editing is much better in this one. Although there are more commas than are strictly needed, there are none just stuck into the middles of clauses. At least not so many that I noticed them like in the last book.

The idea behind this book is right in the title. Butcher has decided to change Dresden's life, really shake it up. The one thing I have really liked about the Dresden books is that Dresden is not a static character. This is not one of those series where everything goes back to the status quo at the end of each book, which is why you can't pick the books up at random and read them. If you don't read them in order, you can't follow the overall story arc and the growth of the character. The truth is that change is a normal thing for Harry Dresden. Well, except for the fact that he can't ever seem to get ahead. But there are far-reaching consequences in these books that you don't always see in series fiction like this where each book has a happy ending and everything is fine again. Dresden may get the technical happy ending, but nothing is ever fine.

In this one, though, Butcher goes after Dresden hard.

In fact, it's so hard that it's like someone walking up to you on the street and just punching you in the face. Which is kind of the problem, because Butcher picks one of the most cliche ways of doing that: "They've taken our daughter." That's sentence one, and, of course, Dresden didn't know anything about having a kid. Nor should he have because it was from a singular sexual encounter. I'm just going to say, really, only teenagers expect people to believe that you can have sex once and get pregnant.

Sure, I know that it's technically possible, and teenagers, which I know from years of working with them, want adults to believe that, really, they only slipped up the one time and, oops!, pregnant. The reality, though, is that that pregnancy is the result of two humping like bunnies for months. So it's really kind of insulting for Butcher to throw the unknown kid at us from the one sexual encounter Dresden had with the mother years before.

But that's (almost) the only complaint I have about the book. Once you get past the whole "I have to go rescue my daughter" thing, it's a well constructed story. Butcher systematically goes through and dismantles Dresden's life and even managed to throw in a couple of things I didn't see coming. That doesn't happen for me very often. [In fact, the big problem I had with book 11 is that I knew who the bad guy was and what was going on by about 1/4 of the way through the book. The rest of it was just going through the motions.] I don't mind Dresden having a daughter. I don't even mind that he didn't know he had a daughter. I mind that it's the result of this one time thing that happened. Beyond that, this book is a great ride.

Oh, I did say "almost" the only complaint. The other thing is the cliffhanger that Butcher threw in on, literally, the last page. I won't say what happened, but I find just tossing that in at the end to be about as cliche as the beginning. So, yeah, take out the first page and the last page and this is an awesome book. Unfortunately, the reliance on those two gimmicks takes the book down a peg for me. It's still a great series, though, and I would highly recommend it to any fan of fantasy, especially modern fantasy.
Posted by Andrew Leon at 12:00 AM