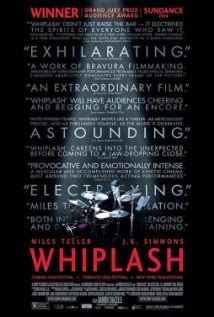 This is the kind of movie that might mean something if it was based on something that actually happened but, as it is, it's almost meaningless. Which is not to say that the message -- greatness comes from adversity -- isn't true, but making up a story to prove your premise doesn't prove anything. I mean, I could make up a story to "prove" that eating spinach gives you massive forearms, but it doesn't mean anything without something real or true to back it up. So, you know, great: A fictional kid becomes a great drummer because a fictional band director is a supreme asshole to him.

And I'm not trying to knock the impact of a fictional story, but it usually helps if your protagonist isn't also an asshole if you want the story to be "inspirational." It also helps when the crisis moment is at least remotely believable. So let's walk through that. Yes, there will be spoilers.

Andrew has worked his ass off to get the drum part for a significant competition. He is by far the best player, but the director, Fletcher, is threatening to give the part to someone else in order to get Andrew to be even better. So far so good.

On the way to the performance, the bus Andrew has taken gets a flat tire which makes him late. This is awfully convenient (read: contrived), but it does happen. I suppose it does, anyway. In all my years of riding school buses (similar in most respects to paid public transportation), we never once had a flat tire. I did have a couple of buses break down, though, so I'll concede the possibility, We're still okay.

Andrew, in an effort to make the performance on time, runs to a conveniently located (convenient in that he could get to it on foot) car rental place. Okay, so I have a bit more of an issue with this. In my experience, car rental places aren't just scattered around randomly like gas stations. We're beginning to stretch things, but I'll still go along.

Andrew gets to the place where they are performing. He's past call time, but he's in time to play for the performance. Fletcher is pissed that Andrew's later and threatens to give the part to another of the drummers. They have an argument, but Fletcher, evidently, agrees to let Andrew play... except that Andrew doesn't have his sticks, and Fletcher refuses to let him borrow some from one of the other students. He may play if he can be back with his sticks in five minutes.

Okay, I have a really difficult time accepting this bit. Fletcher wants to win the competition. He is completely about winning. Andrew is by far his best drummer (probably his best musician), but he's going to let someone else play instead? It just doesn't fit with Fletcher's personality. He would wait until after the performance to punish Andrew for his tardiness rather than risk losing the competition.

At any rate, Andrew dashes back to the car, speeds back to the rental place, grabs his bag, and speeds back... and he has a car accident. A bad one. The car rolls several times and stops upside down. Yet, Andrew crawls from the wreckage, covered in blood, and runs, sort of, the last few blocks to where they are performing. And I'll give them that. As unlikely as it is, sometimes people do do extraordinary things. However, it completely falls apart after that...

Andrew is bleeding from his head, blood is dripping off of one hand, and his clothes are ripped and shredded. In short, he looks like he was just in a car accident. He makes it all the way through the building without anyone stopping him. He makes it onto the stage without anyone stopping him...
Wait a minute. His band is already on stage, evidently, just waiting for him. During a competition, the band is sitting there with no one at the drums just waiting for... him.
1. Um, we're supposed to assume that the judges are just waiting patiently for some indefinite amount of time for the late drummer to show up. The drummer who ran out of time before he even made it back to the car rental agency.
2. We're supposed to assume that Fletcher did not put in one of the reserve drummers he had on hand. One of them was good. Not as good as Andrew, but he was good. That we're supposed to believe this of Fletcher, that he is just waiting for Andrew, is even more unbelievable than that the judges are waiting for Andrew.
3. When Andrew walks onto the stage, covered in blood, no one interferes. He just goes and sits down at the drums and starts playing. No one -- NO ONE! -- is like, "Dude! You're covered in blood! What happened? What are you doing?" Not any of his bandmates, not Fletcher, not any of the judges or any of the people watching. Um, I'm sorry... That's insane that we're expected to believe that he just walks out onto the stage in that condition and no one stops the proceedings to see what's going on.
4. Andrew isn't able to keep up; he's dripping blood all over the drums; he drops one of the sticks and has trouble retrieving it. Finally Fletcher does something. He comes over and orders Andrew off the stage. Not nicely. I don't care how big of an asshole you are; if your best drummer is bleeding out on stage, you have more concern than to come over and yell him off the stage.
5. Andrew loses it, about the only thing in this sequence that makes any sense, and attacks Fletcher right there on the stage in front of everyone. And gets expelled for it. What? Seriously? We're expected to believe that a kid who was just in a car accident, bleeding from a head wound, and was just screamed at by his director during a performance got kicked out of school for losing control?

Basically, this whole sequence dance along the Cliff of Belief like a blind man, almost falling, almost falling, almost falling until, finally, falling right down into the Sea of Disbelief far below. Nothing that comes after this really works, including the scene where they are convincing Andrew to testify (for lack of a better word) against Fletcher about his abusive ways. So they know they way Fletcher treated people and they still expelled Andrew? Riiight...

So, yeah... I really couldn't buy into the movie. I get that music is competitive and can be harsh, but, honestly, Damien Chazelle has admitted to basing Fletcher on one of his band directors, so the whole thing comes of as sort of a bitter, "You wrecked my life," kind of thing. I don't feel bad for him, nor did I fee bad for Andrew. Andrew was an arrogant asshole. And, well, if the point of the movie is that you only become great through adversity, then we see that Chazelle gave up and walked away from music. As the movie points out, if you become discouraged enough to abandon the thing you love, you were never meant to be great, anyway, so Chazelle needs to just get over it.

Oh, and the recurring story about Charlie Parker (an actual jazz player) isn't accurate. Chazelle re-wrote that to fit his movie.

All of that said, J. K. Simmons is fantastic as Fletcher. He is the kind of villain that you hate and respect at the same time. Then hate some more. The best supporting actor nomination for him is well-deserved.

Miles Teller is also pretty good. Not great, but he was good. And good at not being likable. Even when wanting him to succeed, you also wanted him to fail. Basically, it's a movie of not likable characters. The only two people in the movie who are decent human beings are Andrew's father and Andrew's (short-lived) girlfriend.

It's not a movie I would recommend to, well, anyone, and it doesn't belong on the best picture nomination list. It's more deserving than The Theory of Everything, but that's not saying much.
Posted by Andrew Leon at 12:00 AM