A Shot in the Light: parts I-IV (a book review post) 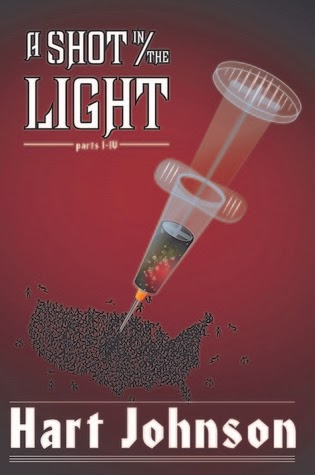 You can find my review for part one, "A Flock of Ill Omens," here.
You can find my review for part two, "In Short Supply," here.
I had intended to review parts three and four separately, but, before I got finished with part three, the individual parts became unavailable, so I'll be reviewing the first collection with a focus on parts three and four, since I haven't talked about them, yet.

The first thing I want to note is that the editing fell into a sinkhole or something somewhere between parts two and three. I believe that I noted in my review of part one that it was pretty clean but, by part three, it was like having the maid who doesn't do windows. In other words, the grammar and punctuation errors started getting in my way of seeing the view. Now, I will admit, editing issues stand out more to me the less I'm enjoying something or, to put it another way, I more easily overlook those kinds of copy-editing issues when the story is compelling. There was nothing here by part three to keep me from noticing every single error, some of them the kind of errors that shouldn't have existed to begin with. Example: Periods and commas NEVER fall on the outside of a quotation mark. If you look above to the links I've included, you can see that the commas, even though they are not part of the titles, are within the quotes. That's the proper way to do it. That should be a simple thing, and the increasing volume of people punctuating only outside of quotation marks is becoming troubling, and it's not something I expect to find in the work of an experienced author.

The other thing that was tiresome was the overuse of the past perfect and past perfect continuous verb tenses. I'm not sure exactly when this started happening, but I started noticing it in part three. The chapters started beginning with these elaborate thought flashbacks of everything that had been happening to the character since the last time we'd seen that character. For instance:


He'd left the apartment before everybody got up, deciding there was no better time to get the lay of the land. He'd started with Fort McPherson, an Army base he'd been to for Special Forces training twice upon a time, so the sense of familiarity had given him an advantage when he went to see what was going on.... Once he'd made his way onto the grounds, he'd stood in the trees to watch for a long time.

That goes on for almost that entire chapter, telling us everything very passively after the fact. This is the very definition of "telling" and not showing. There's no tension, because we know everything already happened from the character's perspective and he's just thinking through it all. Not to mention that passive storytelling just grows boring after a while.

And I'm not even going to mention the fact that "army" and "special forces" shouldn't be capitalized. Oh, wait...

Now, I'm going to jump back to an issue I mentioned in part one, because it comes up again part three: the use of bug bombs to sterilize living environments. It bothered me when it was done in part one because, really? I mean, don't you think that if we could use bug bombs to kill viruses on open surfaces that we would be using bug bombs to kill viruses? By "we," I mean hospitals and health care people. For all I know, there are "normal" people out there who do use bug bombs in this way, and I bet they wonder why they still get sick. But I digress. After it happened in part one, it was possible that it was a misconception of the specific character; I didn't believe that, but it was possible. In part three, some other character wants to do the same thing, so it became apparent that it was an author issue as it seems to be common knowledge among all of the characters (who are all supposed to be intelligent and accomplished). This kind of research flub really bothers me.

And it's not the only one.

Also back in part one, one of the characters finds an office complex full of people who died from the flu. It was like they all got sick at once and died before any of them could get home. Or to a hospital. Or anything. This is after the author has already shown us other people with the flu being sick for long periods before succumbing, so I didn't understand why would have this building full of dead people. But I reserved judgement on that in case there was something else going on. However, by part three, finding office complexes full of dead people has become kind of normal, and it makes me wonder, again, if the author did any research beyond watching The Walking Dead. People don't get the flu and drop dead from it a few hours later. Employers don't keep people at work who are puking and running high fevers. This idea that there would be whole office complexes of people who died because they got too sick to leave is just.. wrong. Poison gas, maybe, but not any kind of disease. Biology just doesn't work that way.

On top of the scientific inaccuracies, one of the main ways the author moves the plot forward is by having the (supposedly intelligent) characters repeatedly doing stupid things. Like sneaking out alone. In fact, in part four, every main character but one sneaks off alone at some point and, each time, something bad happens. It became too much for me and, again, made me think of shows like The Walking Dead and Breaking Bad where stupidity is substituted in for personality so that the author(s) can move the plot forward. That was actually the breaking point for me, that all of these characters kept doing this stuff. Actually, it was all because of one character: Sydney. She sneaks out after someone else who has sneaked out, and she has no good reason to do it. The author prompted her by giving her a "bad feeling," but it was so that she would be there to rescue Theo when the bad stuff started happening. Sorry (not sorry), but I hate contrived plot points.

Honestly, it was a struggle for me to get through part four of A Shot in the Light. I only did it because I had previously stated that I would give it through part four. All of the issues with the story that I mentioned in my first two reviews are still present along with the issues that have been added in. So that's it for me. I won't be continuing to the next part or collection or whatever is next.

I will point out again, though, that the writing is fast-paced and there's a lot going on in the story. For most people, the grammar/punctuation issues are not going to be a problem. And, maybe, details like the bug bombs won't be an issue for most people, too. Based on the other reviews for "A Flock of Ill Omens," I have to assume that that is so. I do have a mild curiosity as to what is going on "big picture" in the book, but it's not enough to prompt me to struggle through the rest of the series.
Posted by Andrew Leon at 12:00 AM