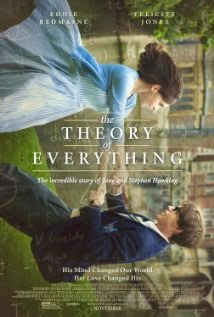 I'll start by making it clear that I am not a Hawking fan. In general, I am not a fan of science that has a greater relation to the kind of "science" that Greek philosophers did than to actual science. But that has nothing to do with the movie, which is kind of unfortunate, actually, since the movie barely touched on anything to do with science other than that Hawking was working on his PhD in physics.

In fact, the movie doesn't seem to have much to do with anything. The trailers seemed to indicate the movie was going to be focusing in Hawking's survival of his early onset motor neuron disease, and, maybe, the movie looks like it's heading in that direction at one point. Hawking meets Jane (the movie opens with that), they fall in love, Hawking falls on his face and discovers he's going to die. He has two years. Jane proclaims, "We'll fight this together." And, well, that's it. They just glide on through and never mention the fact that Hawking failed to die or why he lived. So, basically, the thing that might have made the movie interesting is left behind as if it was nothing more than a conversation over breakfast, "Oh, and by the way, we'll fight your disease together. Have a good day at work doing physics."

I did become curious, though, as to why Hawking did survive, and I tried to find out, but there's not a lot out there on the subject, at least not any information that requires a lot more time to find than I was willing to put into it. Basically, though, it sounds like the general attitude is, "Oh, he just didn't die." Did he have better care (Jane) than other people? Was it love? Was it determination? Was it just that he's so smart? None of those things are touched on in the movie, and I didn't see anything in a quick survey about Hawking, either. He just lived. Kind of like Harry Potter.

As far as the movie goes, there was nothing compelling about it. It's not that it was boring (that would be something that could be said about it, at least), it just wasn't anything. If the power had gone out or the projector broken or, for any reason, the movie had to be stopped, I would not have felt enough interest to wonder what happened. When it comes down to it, more than anything else, the movie is about what a horrible deal Jane struck when she said she wanted whatever time she and Stephen would have together, but, then, she didn't expect that to be more than two years.

In effect, the movie is about the horrible marriage that seems so common amongst most couples and hardly needs to have Stephen Hawking in it to drive that point home. And if it has a point, it's probably during the fantasy sequence at the end where Hawking imagines himself walking again and gives his "where there is life, there is hope" speech. I don't think I needed a movie to make that point, and this movie certainly doesn't support that point. Not in any way that matters.

For some reason, people seem to think that Eddie Redmayne did some kind of spectacular job playing Hawking but, mostly, he just sat in a chair with a grin plastered to his face. To say that I was underwhelmed would be an understatement. As far as I'm concerned, there's nothing impressive about this movie, least of all Redmayne's performance. As to why it's being considered for any kind of Oscar has everything to do with the person it's based on and nothing to do with the merits of the film, of which it has very few. This has Heath Ledger written all over it to me, i.e., getting an undeserved Oscar for which there would have been no nomination if he hadn't died. Not that Hawking is dead, but it's the same kind of sympathy.

Maybe, I'm a heartless person, but I don't have that kind of sympathy. Redmayne hasn't delivered an astounding performance, and people wouldn't think he had if he was playing someone we'd never heard of. But, you know, it's Hawking, and we all feel bad for Hawking, so "Oooh! He was so good!"
Sorry, I cry "Bullshit!"
Posted by Andrew Leon at 12:00 AM