Dead and Moaning in Las Vegas (a book review post) 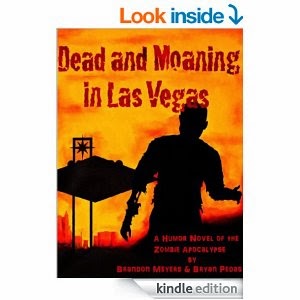 I'm not much a fan of the modern zombie story. Or, actually, of any zombie stories. I just don't get the attraction. Well, from a sociological standpoint, I do get the attraction, as I've talked about before, but I am not attracted (maybe, it's the lack of a cell phone). That doesn't mean there hasn't been the odd zombie story here or there that I haven't disliked:
Resident Evil (the movie, not the game (which I've never played), and only the first one)
Shaun of the Dead
Dead Beat
Really, I think it all comes down to this whole eating brains thing, which I just don't get. Where did that idea even come from and what kind of sense does it make?

Well, it doesn't make any sense, and that's part of the charm of Dead and Moaning in Las Vegas. That it pokes its rotting finger at the whole zombie thing while adding in social commentary is what makes the book work. That and the completely unlikely heroes. And that the real villain is not one of the zombies. And that the zombies are almost lovable with their constant nose-picking and chewing on, well, everything they can get their hands on while looking for "fud."

The only drawback is that it's never really explained what's going on, but I think that's just a drawback for me, because it's part of the structure of the story and an explanation would actually weaken it. Still, for me, I want to know what's going on. How everything happened. Okay, honestly, I think that information is already in the story in that it takes place in Las Vegas, but that's all the hint from me that you're going to get.

At any rate, if you like zombie stories and you don't mind them being mixed with hilarious absurd comedy, you should love this book. If you don't like zombie stories but love absurd comedy, you may still love this book. If you take zombies just a little too seriously, you might want to hop on your Segway and look for the newest "how to survive the zombie apocalypse" book.

A note:
I'm not dealing with any editing, etc issues in this review, because my copy of the book is from the release, and it had some formatting issues. My understanding is that all of that stuff has been fixed.
Posted by Andrew Leon at 9:42 PM