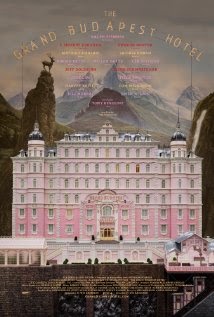 Wes Anderson is not your typical film maker, not by any standard. His films are, at best, quirky or, if it's not the kind of thing you like at all, actually, I suppose the best would be something more along the lines of weird. At any rate, they're different. If you want explosions and action, you're probably better off going somewhere else. Although there was a ski chase in this one...

Ralph Fiennes as M. Gustave: I am not always completely satisfied with Fiennes. He seems to oscillate between extraordinary and, well, pretty awful. I'm not sure if it's that he just sometimes chooses poor roles or if he's erratic as an actor. Whatever the case, he was delightful in Grand Budapest. Utterly charming and debonair. It's a good thing, too, since the weight of the movie was on him. He pulled it off magnificently.

Adrien Brody as Dmitri: Not the role required much of him, but Brody was great in the role. He looked the part, and he played the part. What more can you ask?

Willem Dafoe as Jopling: Dafoe is just kinda creepy all by himself so, when you put him in a role as someone who is creepy, you kind of can't miss. Not to mention the... I don't know; it's like they gave him lower jaw fangs or something. Certainly not someone you want to mess with.

Jeff Goldblum as Deputy Kovacs: I'm not sure Goldblum went out of his way in this part; I mean, it's not like it required that much, but I loved him in it. He's just got a... presence, and I wish he did more movies. favorite line from Grand Budapest: "Did he just throw my cat out the window?"

[Can you see the theme with the flying cat? That's my theme, not a theme of the movie.]

Jude Law as Young Writer: Law has a great voice, so he works great as the story teller. Well, the story re-teller.

Tilda Swinton as Madame D.: If I hadn't known it was her, I wouldn't have known it was her. My only issue with the movie, if you can call it that, is that Swinton plays a woman about three decades older than she is, and I don't know why Anderson wouldn't just get someone of the appropriate age to play the part. But, then, there's Swinton doing this amazing job bringing that peculiar look she has even though you can't tell it's her at all, and I guess Swinton was the right choice.

Tony Revolori as Zero: Actually, Revolori was great as the sidekick/counterpart/protege to Gustave. His very direct manner worked to cut through Gustave's some of Gustave's pretense and offered some great moments in the movie. "Don't flirt with her."

There are other actors I could mention, but these are the ones I thought stood out. These are not in any order, either. I mean, I didn't put them in any kind of descending order; I just went down the cast list and commented on the ones I had something to say about.

So... If you like Wes Anderson's movies, this one will certainly not disappoint. If you've seen others of his movies and were put off by them, this one is no different and won't convert you. Probably. If you've never seen an Anderson film, I'd say this one is a good one to start with. Or Moonrise Kingdom; you can't forget that one.
Posted by Andrew Leon at 10:06 PM