Chasing Thrones and Other Stuff

First up, today is the FREE! release of "Part Twenty-one: The Chase," which is pretty much what it sounds 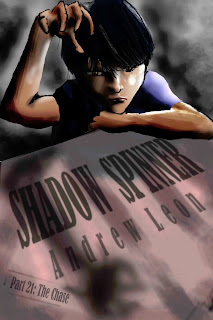 like except without any cars or boats or anything like that. But more about that in a moment...

The next bit of news I have is that I'm now part of the Out of Print group. The blog is going to be about featuring short stories. I have one coming up in June, but there are already two on the site. Drop by and check it out, leave a comment, all that jazz. Maybe, there will be jazz. Not right now, but you can't rule that kind of thing out, especially if I say, "Hey, we should have jazz," which I probably won't, but you never know. And I mean exactly that, you never know.

Now for the other thing:
Our washing machine broke. That happened in the middle of a-to-z and all the crazy deadlines I have coming up here at the end of the school year, so it took longer to take care of than I really wanted it to. What that means is that I had to completely rearrange the garage so that we could have a new washer brought in and the old one taken out.

And I just have to say that it's more than a little bit bogus that we had to buy a new washing machine. Not that we had to buy one in-and-of-itself, because the old machine was, well, old, BUT the last time it broke (granted, that was something along the lines of 15 years ago), we were able to get it fixed at a reasonable cost, but you can't do that anymore. Basically, the cost of having the old washer fixed was going to cost us the price of a new one, and that just bothers me. It bothers me that you can't have things fixed anymore, because our society doesn't believe in fixing the old stuff; it only believes in buying new stuff. I do like the new washer; it's all water efficient and stuff, which is good for the environment, BUT I hate that everything is made around this idea of throwing it away and buying something new when the time comes.

But all of that is beside the point, because the point is this: While I was rearranging the garage, I found 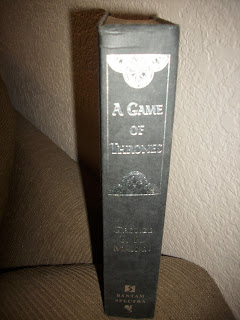 Yes, that is a first edition copy of A Game of Thrones, only read once, by my wife before I met her (and that is, indeed, my thumb in that picture). She didn't care enough about it to ever want to read the next one, so it's just been in storage, mostly, since then. I checked around ebay and copies like this one (sans dust jacket) have been going for over $100, so we're going to sell it. However, before I stick it up for auction, I thought I'd see if there are any of you out there that might be interested in it before I dump it off on the highest bidder. Aside from the fact that it doesn't have a dust jacket, it's in great shape.

As mentioned above, today is the FREE! release of part 21 of Shadow Spinner, so, if you can't afford the copy of Thrones, you can still come away with FREE! stuff. Here is today's list of FREE!:
"Part Twenty-one: The Chase" (FREE! Monday, May 13 and Tuesday, May 14)
(The rest of these will only be FREE! on Monday, May 13.)
"Part Twenty: The Sword of Fire"
"Part Nineteen: Lost in the Garden"
"Part Eighteen: The Angel"
"Part Fourteen: Anger and Laughter"
"Part Thirteen: The Clearing"
"Part Twelve: The Gash in the Floor"
"Part Eleven: The Kiss"
"Part Ten: The Broken Window"
"Part Eight: The Cold and The Dark"
"Part Seven: The Moth and the Shadow"
"Part Six: The Man with No Eyes"
"Part Five: The Police Car"
"Part Four: The Cop"
"Part Two: The Kitchen Table"
"Part One: The Tunnel"
So there you go... 16 of 21 of the current Shadow Spinner pieces available for FREE! today. Spread the word! Spread it like peanut butter. Not regular butter. Unless it's melted. That could be okay. But don't try to spread it like cold butter, because that just rips your bread up and makes a mess.
Posted by Andrew Leon at 9:41 PM

Email ThisBlogThis!Share to TwitterShare to FacebookShare to Pinterest
Labels: A Game of Thrones, a to z, auction, ebay, garage, jazz, man with no eyes, Out of Print, peanut butter, Shadow Spinner, The Chase, The Tunnel, Tib, Tiberius, washer, washing machine