Today, we're going with a themed approach. First up is the new short story by Rusty 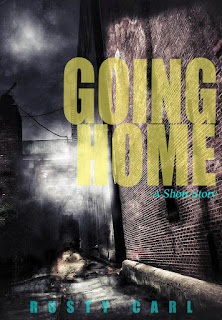 I got a first look at this one as I did the editing on it. However, that doesn't stop me from being able to give an objective review (no matter what Amazon thinks).

What I can say for sure is that it's definitely worth a read, and you can get it here. (Check out that awesome editorial credit!) I mean, for $0.99, it's more than worth it.

"Going Home" is a solid story about a man who has chosen a lie over the truth. When you get to the end, you can begin to understand why. To me, it's interesting because of those times when people willfully choose to believe lies rather than face the truth, something that is much more common than we like to believe. It's not long. It's not that deep, but it does reveal that those depths exist. It raises a lot of questions, not the least of which is "wait! what happens next?" Carl is good at stories that leave you wanting to know more, and this one is no exception.

Next up is Life of Pi, which I finally got around to watching. I was less than impressed.

Sure, it was full of great visuals. Amazing visuals, even, but those don't make the story. [It's the same reason I could never follow a crappy story in a comic book just because it had good art (Spawn).] The story in Pi was very much lacking. The only reason it gets such a "wow, that was so deep" response is that it's one of those stories (the movie for sure and probably the book (though I haven't read the book)) that people can't figure out. Rather than say "I don't understand," they instead say, "that's so deep." Especially the critics, who can never just admit that something doesn't make any sense. Vague symbolism is always a sure way to baffle the critics into saying something is great. [One of my college professors was the same way. The sure way to getting an "A" from him on a paper was to write something beyond his understanding or deliberately vague enough that it seemed beyond his understanding. Rather than say "I don't know what you're saying here" or "This doesn't make any sense," he'd just put an "A" on it.]

However, the biggest problem with that aspect of the movie is that there is a message in there, revealed twice during the movie but obfuscated rather than just stated plainly: believing a lie is better than believing nothing. Or, as it's put forth at the end, "It's better to believe a beautiful lie rather than an ugly truth." That's a sorry message to be delivering and one I just can't get behind. No matter how pretty the package it's wrapped in, and Pi is a pretty package with beautiful bows and ribbons. It's not enough to disguise the ugly truth of the movie, though. Well, maybe, actually, it is. For most people.

And, in Life of Pi, it reduces the only interesting part of the movie to the 30-40 minutes that happen before the storm. Then it's over. And that was hardly a story and one in which nothing really happened other than that someone survived a horrible stranding at sea.

And, sure, you can get all wrapped up in discussions about whether the tiger was God or what the heck was that island supposed to be, anyway, or whether he just made up the story he told the insurance people about the cook just so that they would have something they could grasp, but none of it matters. It doesn't matter because of the statement, "Which is the better story, and wouldn't you rather believe that thing than believe the truth?"

So, yeah, sure, Pi was pretty. It deserved the awards it got for those aspects of the movie, but it certainly wasn't a "best directed" movie. It was a hardly directed movie. I'm glad I watched it; I even kind of wish I'd seen it on the big screen just for some of the scenes on the ocean; but I don't think it was a great movie. It might look all deep when looking down on it, but, if you put your feet in, you'll find it's just a wading pool.
Posted by Andrew Leon at 10:11 PM