I recently mentioned, here, about how disappointing it can be to read a book that you've been looking forward to reading and finding it doesn't quite live up to what you expected. Sometimes, this can make the experience worse than it would have been if you hadn't had expectations. The absolute best example of this phenomenon from pop culture is The Phantom Menace. In many ways, that movie was just doomed to fail in the eyes of the fans. I mean, give a group of people 20 years to dwell on something and build it up in their minds, and there's just no way you can win. But I digress...

I'm usually pretty good at avoiding this issue, of building something up and, then, being let down by it, but it may be part of what's going on with this book, The Crystal Bridge, 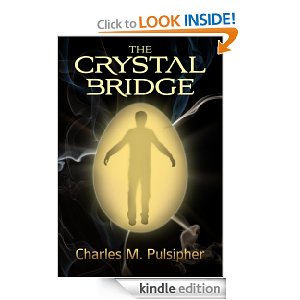 by Charlie Pulsipher. I honestly can't tell. I expected to enjoy this book, and it started out well enough, so I thought my expectation was going to be rewarded, but... well, I'm getting ahead of myself.

First, let's talk about the technicals. As is pretty common with independently published works, Mr. Pulsipher could have greatly benefited from an editor. It's not the worst self-edited job I've seen, and, according to the author, he's made revisions as he's become aware of mistakes, but I can't actually speak to any corrections that have been made, especially since I have an older (physical) copy of the book. There are formatting issues, spelling issues, grammar issues, and, especially, comma issues. The comma issues include one that is becoming, possibly, my biggest comma peeve: starting a sentence with a conjunction, following it with a comma, and following that with an independent clause. For example: "But, he went home." [my example]
This is just wrong. The comma goes in front of the conjunction, so, if you're starting a sentence with one, you don't need a comma. It should be: "But he went home."
There are even more instances of what is probably my second biggest peeve: <independent clause> comma <conjunction> <dependent clause/sentence fragment>. For example: "He felt sick, and threw up." [my example]
Because "threw up" is a fragment, no comma is necessary. It should be: "He felt sick and threw up."

The other major technical issue that has to do with grammar and punctuation is kind of a borderline thing. It's a usage issue, but, in and of itself, it's not actually incorrect. He uses the word "then" over and over to signify a chain of events. However, when you are depicting action within a paragraph, the chain of events is implied so usage of "then" becomes redundant. Generally speaking, you should only use "then" if the action is dependent upon the previous action and, possibly, not even then. [heh] Basically, we have this:
Kaden did <action>.
Kaden then did <action>
The frequency of this increased as the book went on, sometimes occurring several times on the same page (sometimes within the same paragraph), and it became very distracting.

As the book stands, I'd give it a C on the technicals. The comma issues are pretty common, and most people probably won't notice them. The author is planning on a revised edition at some point with the help of a copy editor, so, if these are the kinds of things that will get in your way of enjoying a book, you should probably wait for the revised edition before looking into reading this book.

Normally, this is the point where I'd go into my reaction to the book, but there are some larger, structural issues with the story that I would place in a more objective category; although, some people might disagree with me. At any rate, I'm going to talk about some of these things before I get into what I felt about the story itself.

The author has a tendency to start paragraphs with the name of whatever character is doing something in that paragraph. There is no variety. For example, in the first section of the first chapter, there are 29 paragraphs which include 8 paragraphs that start with dialogue (or are entirely dialogue). Of the remaining 21 paragraphs, 9 start with "Aren," 5 start with "Tracy," and 2 start with "Steph." That leaves just 6 paragraphs that have some variation of language to start them off. The repetition is boring and, for me, slows down the reading.

This next one is debatable, I suppose, but the author breaks up narration by including the character's thoughts in italics. This seems very redundant to me. When you're writing from a character's perspective, you are experiencing the world through that character's eyes (this is true for both 1st and 3rd person), and this book, while written in 3rd, is always done from the perspective of the character rather than watching the character from the outside. When you are experiencing the action through the perception of the character, the thoughts of the character are implied in the narration. You don't need to say "he thought" because you're already seeing those thoughts. You also don't need to show those thoughts in italics. I found this incredibly annoying throughout the book, especially since we experienced the thoughts of every character ever introduced, even characters that were there for just one page. And every thought from every character had the same tone.

And a related thing, once any character knew anything, everyone knew it. During the middle of the book and the build up to the big battle, I found this extremely annoying, and, if I hadn't been planning to review the book, I actually would have quit reading it. So the bad guys begin their march and everyone knows. No one has a reason to know. There have been no indications, but, oh, yes, let's get ready for war. And that's not the only thing.

And related to that, the author had an issue with divulging author knowledge through the perception of the characters. Kaden is the best example, but this happens to some extent throughout the book with all sorts of things. With Kaden, though, he has the ability to create this thing he refers to as an egg. As the concept is being introduced, Kaden explains to us how it works. However, a couple of pages later, he reveals that he's only ever used his egg once, and he has no idea how it really works, but  the author wants the audience to know how it works, so he dumps the info to us through Kaden even though Kaden shouldn't have that knowledge. To make matters worse, in relation to explaining about the egg, Kaden "tells" us that he's had to move a dozen times in the last year; the implication is that it's because of the egg, but, then, he's only ever used the egg once, so that just doesn't fit together.

Which brings us to continuity in general. There are two time lines that we're following. The first is Kaden and Aren, two high school students with extra abilities. The second is James, a research scientist working at a secret facility. The author switches back-and-forth between these two groups which implies that the action is happening simultaneously. Granted, this is convention, and convention can be ignored, but the book is set up in a way that says it's following this convention. As you go along, though, you find that, on the teenagers' side, only a week or two has passed, and, on James' side, months and months have passed. Eventually, the two time lines come together, but that's late in the book, and the disjointed nature of the story up to that point makes it hard to piece the action together.

So... taking these issues as more objective measurements, I'd give this aspect of the book a D. These are pretty typical issues, I would think. Sort of average problems for newer writers. If there weren't so many of them, I'd say a C, but the issues just kept stacking on top of each other, and, all together, they bring the grade down.

But what it really comes down to is the story. Was the story worth the other issues? There was some amount of redemption at the very end. The author brings the story around in a circle that ties the ends together pretty well. But it wasn't quite enough for me. As I mentioned, if I hadn't been planning to review this book, I wouldn't have finished it. Too much of the middle of the story was standard fantasy fare to be interesting. It wanted to be interesting, but the author had so much in the book that he stopped short of really becoming interesting with any individual aspect of the story.

And that was really my biggest issue with the book: it just had too much stuff in it. Well over 1/3 of the way into it, we're still being introduced to new groups of characters and stories. Some of these characters were completely unimportant to the actual plot. Like Taggers. Now, this is a character I like, but we spend a lot of time with him, and he has no bearing on the actual story.

The worst offender in this is James. His story is interesting. The science in the science-fiction of his story is pretty well handled. If there was any character I wanted to spend more time with, it was James and what was going on at Omegaphil. But, in the end, even though a main character, he was a totally non-essential character. He didn't do anything other than just show up. That was his contribution to the plot. Showing up. To be fair, his story line is essential to the post-story, so his presence is necessary for the ending, but the author needed to give the character a greater purpose within the story itself.

In the end, I think the author had some great ideas, but he would have been better served to do one of two things:
1. Break the story in half so that he could spend the time giving one of the stories the actual depth it deserved.
2. Significantly lengthen the story so that he could take the time to develop his stories more fully and, possibly, present it in multiple books.
As it stands, I couldn't give the book better than a C, and, given the fact that I actively wanted to stop reading it at several points, I'd lean more towards a D. It's too bad, too, because he handled the ending well enough to make it almost worth reading to get to that. Almost.
Posted by Andrew Leon at 9:53 PM