I want my two hours!

Today is the day of the 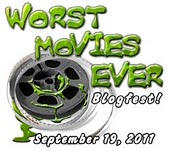 being run by Alex J. Cavanaugh. Should be an interesting topic. See, the thing is, everyone's favorite movies tend to all run in the same direction. Which is not to say that everyone has the same most favoritest movie, but, if you go looking around at people's favorites lists, the movies listed become rather repetitive. It's not all that often you'll come across something that really stands out. However!
People tend to have different lists for movies they hate, and that list can be much more  interesting than favorites. I mean, generally, when you hear that someone loves Star Wars or Lord of the Rings or Harry Potter, you just smile and nod in agreement, "Yeah, that's a great movie." But, when you hear the list of movies people don't like, there is the opportunity for those, "What are you talking about?!" moments, "I love that movie!"

Contrary to popular belief, I quite like movies. Back when I was in high school and college, my friends believed, except for a few exceptions (like Star Wars), that I hated movies. Really, I just made them hate movies. We'd come out of seeing something, and I would point out the flaws and weaknesses, and they would go from "that movie was great" to "oh... that movie really wasn't very good." They interpreted that to mean that I had not liked the movie when that was usually not the case at all. Even though I could pick the movie apart, it didn't (necessarily) diminish my enjoyment. I just accepted that (most) movies would have issues and accepted them for what they were despite plot holes, bad acting, or predictable endings. Eventually, I learned to keep my mouth shut so that my friends could retain their own enjoyment.

None of that is to say that I don't have my own list of movies that you couldn't pay me to sit through again. Okay, well, you probably could pay me, but you'd really have to make it worth my while. I mean, really, really worth my while, and I consider my while to be worth quite a bit. Mostly, I'm going to focus on big, blockbuster movies that I think are completely overrated, although there will be a few where, if I could have, I would have demanded my two hours back. Keep the money, just give me back the time I wasted.

I'm not going to do a countdown here. Well, except for the top few. Mostly, I'm going to go sort of chronologically and deal with them at the time in my life when they happened, and why I think they don't deserve the attention they get.

10. Superman. There has not been a Superman movie made that is worth seeing. I grew up watching the old George Reeves Superman television series, which I thought was great (I haven't seen it since I was a kid, so I don't know how I would feel about it, today, but I loved it back then). The first movie was so much worse than the TV series. Not that Christopher Reeve wasn't good, but the movie itself was just boring. I've never understood why so many people hold it up as the epitome of the super hero movie. Yes, it was the first, but that doesn't make it the best. Besides the boring, it had one of the stupidest endings ever. You  have to understand that this is coming from the 8-year-old me, too. The idea that Superman could fly around the Earth really fast and make time go backwards is just... well, it's stupid. If an 8-year-old could recognize that, there's no excuse for all the adults that were all giddy over the film. And that was the high point of the Superman franchise. Don't get me started on Superman Returns. That's one of those where I want my 2 hours back. Brandon Routh did a great job with what he was given; unfortunately, what he was given was a steaming pile of crap, and there's just not a lot you can do with that.

9. Star Trek. Excluding the latest Abrams version, these movies should never have been made. Again, the first one was the best, and they just went down hill from there. Yes, I hear you all out there cursing me and protesting with mumblings about Wrath of Kahn, but, really, it just sucked. At least, the first one actually had an interesting plot. It might even have been okay if they hadn't been so busy patting themselves on  the back over their less than adequate special effects that they felt it necessary to devote over 30 minutes of screen time to absolutely nothing happening. "Ooh! Our model of the Enterprise looks really cool doesn't it?" "Yes, it does!" "Let's just pan around that sucker for, like, 15 minutes so the audience can really appreciate it!" "Oh, yes, absolutely!" And, then: "Ooh! Look at all the pretty technicolors we can make!" "That's awesome!" "Let's just have Spock fly into this stuff for the next 20 minutes so the audience can appreciate all the cool stuff we can do!" "Oh, yes, absolutely!" What a waste of time.
Now, to be fair, I'm a Star Wars kind of guy, and the action in Star Wars is "faster and more intense!" Action in the Star Trek movies is pretty yawn inducing. That's not tension; it's boredom.
In the end, though, the biggest issue with Star Trek as movies is that I never felt like I was watching a movie. They were just episodes of the TV show that were, for some reason, being shown at the theater. That's just not right. If they'd been on TV, they might have been okay.
The Abrams one, though, that was a movie, and doesn't belong in this list.

8. Batman. To be specific, the Batman franchise that was started by Tim Burton. I think I was the only person that came out of the theater in 1989 with the words "well, that sucked" on my lips. The thing is, if Burton had just been honest and called that first movie The Joker, I might have been okay with it. As it was, though, I hated it. And Keaton, whom everyone was worried couldn't do Batman was fine as Batman, but he sucked as Bruce Wayne. And the more of those movies they made, the worse they got. To the point of, "I want my two hours back!"
Years later, I found out why they were so bad. During a controversy with Kevin Smith, Burton proclaimed, "I would never read a comic book." Tell me how, exactly, you can attempt to make a movie about Batman without ever looking at the source material. That explains why he got everything wrong about those movies.

7. Catwoman. Is there even anything that needs to be said about this one? Well, maybe, source material. Use it. What a disaster of a movie.

6. Event Horizon. I honestly can't tell you why I hated this movie. It was so bad, I've wiped the memory of it from my mind. I just know that my wife and I barely sat through it. In retrospect, I'm not sure why we did. Stupid, stupid movie. One of those movies that forgets that people that really like sci-fi tend to be pretty smart people so failed to bring any amount of intelligence to the table.

5. The Matrix 2 & 3. These movies prove that sequels shouldn't be added after the fact. Although, now, the Wachowski brothers claim that The Matrix was always intended to be a series, that's just a way to justify making sequels for a movie that was never intended to have a sequel. They said as much before they started work on Matrix 2. But the money got into them, and they added a Terminator ending onto what had been a smart, thought-provoking movie. I want my 4 hours back!

4. Green Lantern. I already did a post about this one (you can see it here), so I'm not going to re-review it. Just give me back my 2 hours, okay? With the amount of money this one lost (like $100 million), I can't believe they're making a sequel.

3. Independence Day. The only stupid movie I'm glad I saw in the theater. It was worth seeing it that one time in the theater, because it really did have some cool scenes that would have been lost seeing on just a TV. However, that doesn't justify the utter stupidity that was the plot of this movie. Peter David (one of the greatest writers of comic books ever) did a great review of it back in the day which totally supported all the things that I had been telling my friends that sucked about it. It was one of those movies where the makers tried to distract the audience from the stupidity with cool, flashy things on the screen. Unfortunately, it worked. The only saving grace was Will Smith and Jeff Goldblum; they were great together. It wasn't enough to disguise the big platter of poo poo that was Independence Day, though. At least, not for me.

2. Highlander II: The Quickening. I loved the first Highlander movie. Yes, I realize it's pretty cheesy looking, today, but it was such a great concept. I watched everything that Lambert did for years after Highlander. And there was Sean Connery, too, who was already in my top 3 actors back then in 1986 (he's not anymore, although he probably still makes the top 10). How could they go wrong with a sequel? They forgot they're own source material, that's how. "Hey, I have an idea! Let's take this great fantasy movie we have and turn it into some weird sci-fi movie! That'll work, right?" Wrong. I got to see Highlander 2 for free at a special screening and walked out feeling like I'd been ripped off. That's pretty darn impressive, if you ask me.

1. The Dungeonmaster. Easily, the worst movie I've ever seen. Which I've mentioned before. I don't think 14-year-olds are supposed to walk out of movies feeling like they just wasted 2 hours of their lives. I mean, 14-year-olds are supposed to be wowed by anything that approaches special effects and be easy to please, right? Evidently, that was not the case with me. I walked out of that movie with the thought that it was the worst movie I'd ever seen, and that opinion hasn't changed in more than 25 years. Considering that Highlander 2 and Green Lantern are on this list, The Dungeonmaster is impressively bad. I want my 2 hours back!

There you have it. The worst movies I've ever seen. Well, many of them, anyway. There are a few more that could have made the list, like that monstrosity of a Godzilla movie that was made by the Independence Day people. And the animated Transformers movie. Probably even Cowboys vs Aliens, but I actually haven't seen that one, yet, and I'm not sure I'm brave enough to do it after what I've heard.
Okay, you can all scream at me, now.
Posted by Andrew Leon at 11:18 AM