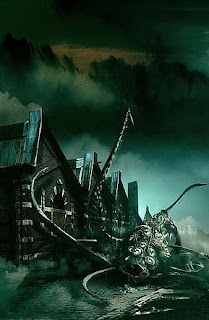 
So let's play pretend for a moment.

It's Christmas. Now, I don't know who you are or how you celebrate Christmas or the yule season, but, yet, that's what it is. You're descended from an ancient, reclusive people who live in a small fishing town in the northeast. Not many of them ever leave. Yet, somehow, whether it was your grandfather or your mother or whoever, one of your more immediate ancestors left that village. All you know is that once a century, your people, your family, are commanded to keep the Festival. You are the only one of any of the scattered ones of your people who return to keep the tradition.

And what you find there in that village of your people, that village that you have never before visited, is far from... normal.

"The Festival," by Lovecraft, is the story of a man who did go back. A man who finds stranger and stranger things the more he allows himself to be pulled along with the happenings of the Festival. A man who, in the end, is left to question... everything. Even his sanity.

The real power in this one, apart from Lovecraft's imagery, is the blending of the mundane with the fantastic. Everything is just normal enough for the protagonist to think that he's imagining things or that he's the one who's crazy.

All I know is if I ever get called to some out-of-the-way location for some ancient family tradition that I am going to do some major amounts of research before I go.
Posted by Andrew Leon at 12:00 AM