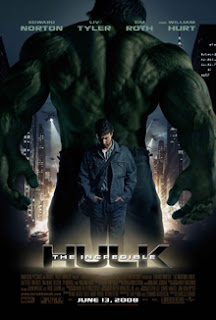 I have long been a Hulk supporter. That started with Ang Lee's Hulk, which I felt was unfairly maligned. [I intend to re-watch that one, too, now, because I realized when watching the MCU Hulk that I had rolled bits and pieces of that one into this one.] One reason is that a lot of the shade being thrown at both movies had to do with the animation. Generally speaking, people making movies are making them as technically proficiently as they can, and I am willing to overlook poor tech, especially when you're dealing with companies on the cutting edge. I mean, have you seen movies made before Star Wars? And no one then was complaining about things looking fake or not.

That said, there is a problem with the animation in The Incredible Hulk that has nothing to do with capability; it has to do with choice and design. Those things are fair game for slammingy. So here's the problem with Incredible: Every time Hulk was onscreen for any kind of "closeup" I felt like I was watching Lego Hulk. Of course, Lego Hulk is based on this Hulk, but Lego is intentionally cartoony, and this movie was trying to not, which I will get more into in a moment. Effectively, whoever was doing the animation for Hulk's face went with a poor design that made him look like a cartoon dog when they showed his expressions, and it just does not work.

It especially doesn't work with Edward Norton. Oh, god, he is so pretentious. No, I am not a Norton fan. As I said in my Iron Man review, casting is something that Marvel has proven to be very adept at, but this movie was a colossal fumble. I really have never been able to figure out what they were thinking with this whole deal because, to get Norton, they had to give him script control, and he re-wrote the initial script. What I will say here is that Incredible does not feel like a Marvel movie. At all. That was the thing that struck me most, the feel of the movie. Now, I don't know what the original script was like and whether it had the correct feel or not, but, in the end, that doesn't matter, because it was the Norton script that they used. And Norton who blocked the end-credits scene and made it into a pre-credits scene, also very un-Marvel-like.

The result of all of that is that Incredible feels like an ode to King Kong rather than a Marvel movie. There are two problems with that:
1. Peter Jackson had just made his horrible adaptation of Kong. Maybe Norton thought this would be better? I don't know. It was unnecessary, though, to do this so close on the heels of Jackson's.
2. Hulk is a Jekyll and Hyde story, not a King Kong story so, well, wrong movie Norton. Come on, man, you really could have dealt with the horror of turning into a monster you don't want to be -- and the opening of the movie looked in that direction with the whole "days since last incident" thing -- rather than the romantic Kong angle. The cave scene is so painful to watch.

Of course, all of this was being done vaguely in conjunction with Universal, so maybe they are the reason for all of the King Kong stuff? That, I do not know.

All of that, and I never buy Norton as being tortured by his predicament. Maybe frantic, but not tortured.

Speaking of Peter Jackson, though he has nothing to do with this, I like Liv Tyler. I do. She was great as Arwen. But she is not good as Betty Ross. She's too soft spoken. I think Jennifer Connelly was much better as Betty. Maybe I'll change my mind when I watch Lee's Hulk, but I don't think so. I'm going to go out on a limb, here, and say that Eric Bana was better as banner, too.
Of course, Ruffalo has turned out to be the correct choice, because Ruffalo has that tortured look that makes Hulk work.

And I'm not even going to start on the Abomination. Tim Roth was fine, but, again, whoever made the animation decision made the Abomination an abomination. His cameo in Shang-chi is so awesome, especially in comparison to this monstrosity. Pun clearly intended.

William Hurt is the best part of this movie. Or, maybe, the cameo by Lou Ferrigno. And the one by Martin Star. None of the things that should have been the best parts are the best parts. They are the worst.

Oh, and what's the deal with Stark going to Ross at the end of the movie? I don't think that is ever dealt with. Maybe I'm wrong or maybe Marvel was hoping we'd forget, which we probably did, considering I had forgotten all about that until I re-watched it.

Here's the final word:
The Incredible Hulk is the lowest grossing of the Marvel movies, and there is a reason for that. It's not a movie I will ever go back and watch again "just for fun."