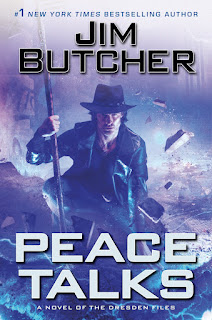 What?!?! Two reviews in the same week? What the heck is going on here?

It's been a while since I've been in Dresden-land. A long while. It's possible I should go back and re-read the series at this point but, with 17 books now (this is number 16) in the series proper and a slew of related books with short stories and things, it's highly unlikely that I'll ever do that. Fortunately, Butcher is quite talented at reminding readers of details from earlier books when they are needed.

Unfortunately, it's not enough for this book to be a good place to come into Dresden if you wanted to just jump in. Some of his books are self-contained enough that anyone could pick one of those up and read it on its own. Not this one. Not any of the last few, in fact. We are solidly into the area of the series where you need to have read pretty much all of the previous books. The memory prompts for readers are not enough to get you through if you haven't been reading. And there's nothing wrong with that; that's the nature of a long series. What I'm saying is that this is not the place to come in as a new reader but, also, Butcher is very good at helping his long-time readers along, which most authors are not good at.

But how is Peace Talks, I hear you asking. Peace Talks is good. It's a solid entry into the Dresden series. It has some good moments and interesting developments. It was a fun read and a welcome change of pace for me compared to the other things I've been reading lately. If you're a Dresden fan, you will, of course, be wanting to read this as big things are afoot, and this is the book that's going to lead you into Battle Ground.

However, upon reflection after finishing it, the book has a few... issues. Well, one big issue. It has too much going on it. Too many big things going on it, and it's difficult to get invested in anything because you're constantly being distracted by the next ultra important development which is super big.
Let me sidestep a moment...

For at least several books now, Butcher has been developing this idea of a Black Council that's in existence operating from the shadows and have a particular hate-on for Harry. He's been building it up and up as the next Big Bad showdown, kind of like with the showdown against the Red Court which took several books of building. And while the Black Council is mentioned in this book, they are sort of shoved out of the way for an even bigger menace, one which kind of appears from nowhere. And, yeah, we could argue that point, but there was nothing prior to this book to indicate a villain of this level, so she's really from out of nowhere, and I don't really approve. It's like telling me that you make the best chocolate cake ever and telling me and telling me and, then, inviting me over and making me banana pudding. There's nothing wrong with the banana pudding; I like banana pudding; but it's not what you lead me to expect.

Sure, I get that life can be like that. Things come up and distract us from other things, and we have to decide which things to focus on. But that kind of thing makes a book messy, just like it makes life messy. I can't do anything necessarily about the messy in my life, but I would prefer a little less of it in my reading material. These threads could have, probably should have, been developed into separate books.

Then there is the issue of McCoy and his extreme uncharacteristic behavior at the end of Peace Talks. And you can try to no-prize your way out of what he did all you want, Butcher himself did by stating that McCoy was "out of control," but I'm not ever going to buy that Ebenezer did what he did for any other reason than the author poking his finger in McCoy's head and making him do something outside of his character. I understand that sometimes, as an author, you want or need certain things to happen for the plot to do what you want, but, as an author, I don't personally approve having your characters do things outside of the personalities that you've written for them.

Was all of that vague enough for you?
I am trying to do this without spoilers.

Having said all of that, I want to reiterate that Peace Talks is really good. I enjoyed it. It's not the best Dresden novel, but it's certainly not the worst (that would be Turn Coat, as far as I'm concerned). I've already ordered my copy of Battle Ground and am eagerly awaiting it. But what is a review for if not for pointing out the good and the bad?