Oh, look! A new series!
First of all, you can blame any and all cocktail shenanigans, at least the shenanigans on my blog, on The Armchair Squid. If hadn't started posting his cocktail experiments on his blog, I wouldn't be posting these. In all honesty, I'm not sure if I would have gotten as into cocktails as I have. But he started posting stuff, which prompted me to mention those to my wife from time to time, which generated interest, which may have been what lead to that first book I mentioned in my Smuggler's Cove non-review review, and that book certainly lead to Cove which is what lead to my own experimentation.
Did you follow all of that?

I suppose it's not all that important other than that Squid sort of inspired this first cocktail, so I hereby dedicate it to him. Or something like that.

That I am calling it "The Redhead" is a joke. Not a joke about him but about the ingredients. If it's not fully obvious, I suppose I can explain, but I'm going to wait and see if people get it.
But let's get on with it, shall we?

A thing Squid has mentioned on his blog is how much he likes fresh-squeezed orange juice. I'm not much of a juice drinker myself, but I can understand the appeal of fresh-squeezed orange juice. Because we had oranges for some other cocktail or other we were trying out, I thought I would make an orange-themed cocktail in honor of Squid. But, um... Well, it wasn't that great.

Let me walk that back. I didn't care for it too much because it was too sweet. It was tasty but, for me, it had no bite, so that recipe isn't here. I didn't even write it down. I decided to give it some bite, instead, so let's examine what happened. 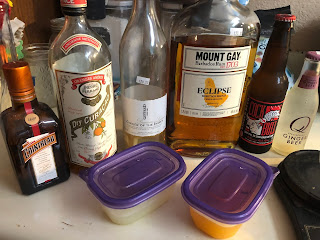 Here are the ingredients I played with, and I'll post the full recipe at the bottom.

First, orange juice is too sweet on its own, so I added some lemon juice to it to give it a bit more acidity. The two little containers in front of the alcohol are my fresh-squeezed juices.

Next, I needed to add some orange liqueur. 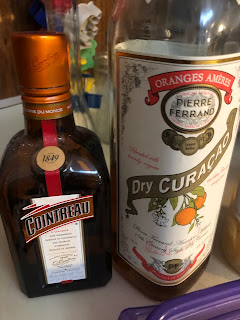 Yes, we now keep more than one kind of orange liqueur in our house.
I decided to go with the Cointreau for this. The Curacao is a bit more sweet and, remember, I was going for something with some bite.
Next is some ginger liqueur. You can see that to the left of the Eclipse in top picture. We bought the ginger liqueur for one of the first Cove cocktails we made, and you can tell it's made for mass consumption. It has no spice to it at all. After using it the first time, we cut up some fresh ginger and added it to the bottle. Now, it has some spice to it. We won't be buying ginger liqueur again but will make our own, something we have done in the past. All I can say is that you won't be able to get quite the same drink I have here because I have augmented ginger liqueur. 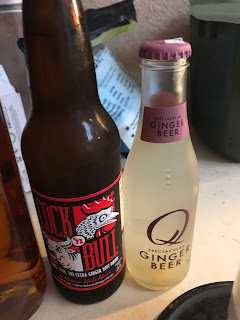 Ginger beer is another thing Squid has talked about on his blog, rather a lot, actually, and, honestly, I never thought I'd try it. But, then, I didn't realize it was actually a cocktail mixer. Cock and Bull is, evidently, a very popular ginger beer, and it's tasty. I like it. But... Most ginger beers, I have learned, are made to be consumed on their own as well as being used as a mixer, and that's what Cock and Bull is. Q, on the other hand, is intended just as a mixer so, guess what, it's spicier. And pricier. And I like it, too, just on its own, though I don't think I'll be buying it just to drink by itself. Cock and Bull is $1.25 for a 12oz bottle while Q is $2 for an 8oz bottle. You can see where the value is, and the difference between the two is not significant enough for me to want to buy Q on a regular basis. Not to mention that I have to go to a specialty store for Q, while Cock and Bull is available at several local grocery stores. At any rate, for this drink, I prefer the Q, but it's not essential. 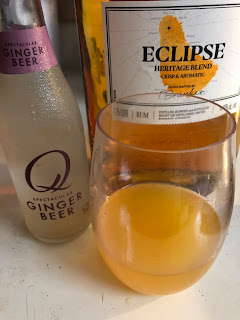 Eclipse, by Mount Gay, is our general rum of choice. They make some better rums, specifically, their Black Barrel, but, for the price, we go with Eclipse. My understanding is that Bacardi is cheap shit, and we don't drink it. The picture above is the prepped drink with everything except the ginger beer in it. I wasn't going to drink it right away (I prepared the drink when I had the light to take worthwhile pictures), and ginger beer is fizzy, so I waited to add it when I was going to imbibe. It's kind of pretty, though, huh?

If you decide to make one for yourself, I'd love to know what you think of it, so let me know.
And, now, for the recipe!
The Redhead
3/4oz orange juice
1/2oz lemon juice
1/2oz ginger liqueur
3/4oz Cointreau
2oz Eclipse (or other light rum)
2oz ginger beer
Posted by Andrew Leon at 12:00 AM