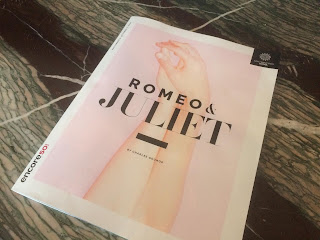 I realize we had a rough opening act with the opera this season, but that ship has sailed (pun totally intended and, if you don't get it, you haven't been paying attention), but they've come back strong with Romeo & Juliet.

Romeo & Juliet may be my least favorite of Shakespeare's plays. At least of the ones I've read. Which is more than a few considering I've taken whole classes about Shakespeare. Look, I have a degree in English; what do you expect? But even as a teenager, R&J pushed all of the wrong buttons for me. My entire response could (and pretty much still can) be summed in, "Stupid teenagers." Yeah, that's how I felt about it when I was 14 and reading it for the first time. It actually put me off of Shakespeare entirely for more than a few years. I do have more of an appreciation for the play at this point in my life than I did when I was in high school but, still, stupid teenagers.

None of which is to say that I can't enjoy a good production of the story. It's not a bad story, though I don't get all of those gushy romantic feels from R&J that seem to be so common. For one thing, Romeo is a cad, but I'm not going to get into that right now.

R&J is not a commonly performed opera these days. It's French and, evidently, French is out as far as opera styles go at the moment. Honestly, I don't understand why. Maybe I just don't know enough about opera and music to understand but, having seen it now, R&J didn't seem much different to me than other operas of its time period. SFO, though, hasn't done R&J in decades until now (which seems to me to be another example of what I was saying in my SFO post about Shilvock). It's weird to me, though, that this opera in particular would fall through the crack. Because pretty much everyone knows the story, it seems to me that this should be a great opera to keep in rotation because it should accessible to people exploring opera for the first time. Even though they have supertitles, it still helps to know the story ahead of time.

I think this was a pretty decent production of R&J. Except for the set. They went for something which was barely more than a bare stage. I was unimpressed. Especially in comparison to many of the SFO sets. This one was just... kind of nothing. The costumes were good, but I sort of think the costumes and the set should complement each other, but maybe that's just me.

The performances were great. Nadine Sierra, whom I've mentioned before, played Juliet, and she was perfect. As with all good R&J productions, Mercutio steals any scene he's in, right up until he doesn't anymore, and Lucas Meachem (whom I've also mentioned before) did just that. The other real standout performance was by Stephanie Lauricella as Romeo's page, Stephano. She had a great scene where she taunts Tybalt and the Capulets that was a lot of fun.

I wasn't as sold on the Romeo, though my wife says that Pene Pati was a great singer. I don't disagree with that, and I enjoyed him in the production of Rigoletto we saw him in (see, I've mentioned him before, too!), but he never really grabbed me as Romeo. As I said, Romeo is a cad, and Pati never came off as such. It's got to be believable when all of his buddies are making fun of him that Juliet is just his flavor of the week, but Pati never rose above lovesick, which is almost right but not quite. I mean, he's trying to "meet" another girl when he discovers Juliet. Maybe it's a problem of the writing, though. It's difficult for me to tell since it's in French.

All said, though, I thought this was a fine production, and I think it's a great introductory opera for anyone who wants to find out what opera is all about.
Posted by Andrew Leon at 12:00 AM