Friday, the 13th marked our sixth day of plumbing issues. No one was happy, and I was extremely... uncomfortable... as I waited for the plumbers to arrive at 9:00 a.m. I mentioned the "healthy turds," but did I mention that I'm also very "regular." That "regular" time is somewhere in the 7:00-9:00 am block of time, generally speaking, and there was nowhere to go to the bathroom without going door to door asking to use one of the neighbors' bathrooms. No, I didn't do that!
Fortunately for everyone else in my family, they all had somewhere else to go off to to take care of business.

Let me fill in some details here while we wait for these plumbers to show up, okay?
"My" plumber is a guy who owns his own company. He's mostly a one-man show in a van, though he does sometimes have a guy who works with him. When he suggested "calling in the big guns," he recommended a larger company, a company that has a lot of plumbers working for it. More equipment and all of that jazz. The guy they sent out to do the estimate on Thursday was their No. 2 guy.
Yes, seriously, that's what the woman I spoke told me when I called, "We're sending you our number two guy."
He did the estimate but, he told me while he was here, he would not be the one to come on Friday to do the repair. He was going to be unavailable. The guy who was coming out, with his assistant, was somewhere farther down the chain.

9:30 arrived but there were no plumbers.

They finally showed up at something like 9:47. No, I wasn't watching the clock!
Not exactly.

The guy comes in and looks over the situation. He wants to get under the house to look at the pipes which is a whole separate challenge, because, guess what, there's no access point to under our house from outside the house. What kind of crazy is that? The only way to get under our house is through a trap door in the closet in my daughter's room, so I had to clean out the bottom of her closet so that the guy could stick his head down there and look around for two minutes. Yeah, she wasn't happy with me for that.

The end result of all of this was to tell me that the guy who made the estimate was wrong and that the job couldn't be done except to do it this other way which... basically, he wanted to double to triple the cost of the high end of the original estimate. Which makes me wonder how much of that he gets to keep personally, because he sold it hard. But fuck that! None of what he was saying aligned with anything that "my" plumber had said and certainly didn't go along with what the No. 2 guy had said. Needless to say, I was angry.

I called the company with the intention of speaking with the owner only to find that the guy was already on the phone with the owner. So I asked the woman about what the guy was saying, about it being an impossible job, and whether it was impossible or just impossible for him. In short, was it outside of his skill set? She said, actually, it was entirely within his skill set; he just didn't want to do it. She told me that she would have the owner call me when he got off the phone the shitty plumber who was trying to scam me. But he never called...

I'm assuming that some sort of communication happened between the owner and the woman I had spoken with because, a few minutes later, shithead comes back in and tells me they'll do it for the original estimate, the high end of it, but, still.

Anyway, it was after 11:00 a.m. before any actual work started on the 9:00 a.m. appointment time after all of the shenanigans.

Which almost brings us to the end of this tale. They did get everything fixed by 5:00. -ish. Because it was actually 5:30 before the guy with the shitty attitude left because he tried to pull another set of shenanigans before leaving, but he lost that one, too, because I walked up on him on a phone call with the owner during which he was lying about things that had been said but, when he saw me, he had to quit lying and do what was agreed to.

The other thing of note has to do with what the previous occupants of our house DIYed our plumbing into. Remember how I said we had no clean out? As it turns out, we did have a clean out; it was just buried under a paving stone going into the backyard. Also, it was no good.
Look: 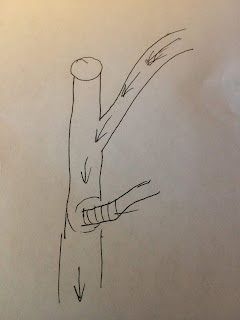 I'm realizing I should have labeled this drawing. heh
The vertical pipe there is the main sewer line running down to the street. The curved pipe with the arrows is the line coming out from under our house. What I want to call your attention to is the other "pipe" with the rings around it. That's not an underground pipe at all. That's the drain pipe from our roof gutter. That pipe is just inside the gate to the backyard, and, I'm assuming, that area would flood during our winter rains. I don't actually know, because the previous occupants attached a sheathe to the end of the pipe (the striped bit in the drawing) and tied it into the sewer line. Totally out of code, of course, which the plumber happily pointed out to me when they discovered what had been done.

So, see, the previous occupants dug up the sewer line, added a clean out (the circular "cap" at the top of the drawing) which only runs in the direction to the street and DUCT TAPED the gutter drain into the sewer line. I have to assume that the clean out was in case roof debris stopped up the sewer line, which has never happened to us, but I can see the danger in what they did. For us, though, the sewer line block was up under the house and the clean out we had there completely unusable. The plumbers had to take all of that out and put in a new line with a clean out that would both go under the house and down to the street. The gutter drain now drains into the yard like normal gutters do and, since it rained a few days after all of this was done, I got to experience the standing water just inside the gate. And there's no paving stone there, now, either, because that's where the new clean out is.

You know, if it's not one problem, it's some other problem, but at least we have draining water in our house again. Right?
Posted by Andrew Leon at 12:00 AM