What Your Blog Says About You: Part Two -- Content

Closely related to the personality of your blog, is the content. One informs the other to a certain extent. I mean, if you want the personality of your blog to be humorous, you don't want your content to be about death or terminal illness or human trafficking or climate change or... I'm sure you get the idea. Although, now that I think about it, a humor blog about death could be, well, funny.
Don't eat the salmon mousse, right?

Your choice of content is the biggest factor in determining who's going to read your blog. In that respect, choosing a topic like "writing" is going to significantly decrease your potential audience. Sure, there may be lots of people out there that think they can write a book and many people with some scribblings, but most people don't want to spend a lot of time reading about how to write. And if your specific topic is grammar... well, good luck with that. No matter how funny you are [See, grammar is one of those topics that most people don't relate to humor, like history. Or quantum physics.], you are not likely to be attracting the masses.

So, then, it's important to look at whom you want your audience to be before you settle on what you want the content of your blog to be. When I started my blog, I knew I didn't want to just talk about writing, because I didn't want to just have other writers reading my blog. Again, as many people as there are out there writing, it's still a small audience, relatively speaking, especially since most people who are out there trying to be writers do it without bothering to really know anything about how to write. (The overall quality of self-published works wouldn't be so piss poor if that were not the case.) And, well, there are so many bloggers that will tell you in excruciating detail the way to be successful as a writer that I didn't want to get mired in all of that.

Which brings us to goals. You have to know the goal for your blog before you can figure out what the content should be. Who is it you want reading your blog? Do you just want other writers? Fine, focus your blog on writing related topics. Do you want your blog to be informational? Focus on the data and post links. Do you want to moms to read your blog? Talk about kids and how to make your house function more efficiently. [Yes, I know that that is somewhat sexist, but it's also mostly true. Hey, it is what it is.] Do you want Republicans? Or Democrats? Talk issues and bash the opposing party. As often as possible. Do you want the whole universe reading your blog? Post silly pictures of cats.
Oh, wait, look! 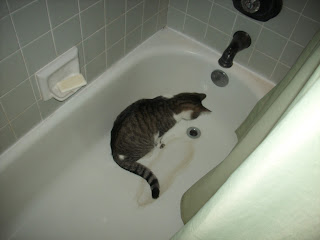 No, I do not know what went down the drain.
And if you're trying to get readers? Well, one thing you shouldn't do is spend nearly every post you write badmouthing readers. Seriously, this one guy I follow (and, no, I don't know why I still follow him other than that it was a subscription thing and comes into my email and I haven't taken the time to make it stop (Make it stop!)) spends almost every post (and thank goodness he doesn't post frequently (which is another reason why I haven't gotten around to unsubscribing)) complaining about how readers are just bunch of cheapskates that can't even spend the price of a mocha to buy his books. Or, like in his latest post, he published an email from a reader (I'm assuming without permission, because I can not imagine anyone giving permission for this) and went on to "defend" himself against the allegations the writer of the email had put forth against him. I'm not thinking this is going to help win him any new readers.

So, yeah... What is your goal for your blog, and do you have content to match it?

For example, one of the things I believe (and from comments I've received from people, I'm pretty sure I'm correct) is that people that like Star Wars will like The House on the Corner, so I talk about Star Wars. A lot. Not posts and posts about Star Wars, but I make sure it comes up in conversation. So to speak. See what I just did there?

Once you've decided on your audience and your content, stick to it. People will come to your blog to deliver the type of content you've said you'll have. For instance, I tend to stay away from political stuff and religious stuff and sports stuff. Mostly, that type of content just causes controversy, and I carry enough controversy around with me to want to delve into topics already filled with the stuff. Which is not to say that you can't make the occasional exception, like I did back in this post, but, mostly, you need to keep your content pretty consistent. Do the kinds of posts you do and stay away from the kinds of posts you don't do.

Oh, let me just add that I don't stay away from any topic because I'm scared of controversy. Anyone that's been around here for any length of time ought to know that I have strong opinions, and I don't mind sharing them. However, I dislike getting involved in arguments that aren't (ever) going to go anywhere, and any time you start talking about politics or religion or, even, sports, people already have their minds made up and no amount of talking about it is going to change anyone's opinion, which I talked about back in this series. See, I'm a Cowboys fan--I have been since I was a kid--and no amount of arguing with me about it is going to get me to change my mind. Fortunately for you all, I don't really care about football, so saying that I'm a Cowboys fan really isn't saying much. But I'm still not changing my mind.

All of this talk about content has made me look up at my heading (you can look up at it, too). That's the stuff I decided I'd be talking about when I started up my blog. Yes, that hasn't changed since the blog started. That's still the stuff I talk about: writing, reading, movies, pop culture stuff. I've branched out just slightly from that in that I now talk about my pets and kids and whatever general kind of thing might come to mind, but the core of what I blog about is still that stuff at the top.

All of that to say, or to wrap up, or something: Your content is important. There are a lot of blogs that I have given up on because they never say anything. Wait, no, because the blog doesn't say what it says it's going to say. How many of you (those of you that do) would continue to follow Alex if he started talking about his guitar all the time. Every post. It was all about how great rehearsal was or how he'd learned some new song or whatever. He's established a particular type of content, and, if he morphed into only talking about guitar practice, people would quit stopping by. And what about Matthew? What if he quit doing his query letter thing and started talking about his love for ping pong? All the time. I'm guessing not many of you are that interested in a blog about ping pong.

Content may be more important than personality where blogging is concerned, and I almost used it as part one, but I'm gonna guess that most of you never thought specifically about the content of your blog and just let it develop from your personality, which is fine. As I said back at the beginning, the two things inform each other. I chose the topics I chose because I like those topics, so it makes it easy to have things to write about (as opposed to choosing grammar and trying to make gerunds funny (and I think there's a very in-poor-taste joke there about Richard Gere just waiting to happen, but I'm not going to try and figure out what it is)). So, if your content has flowed out of your personality, it may be worth giving it a think, figuring out what your goals are, who you want your target audience to be, and making some adjustments to your content. Or not. It's just one of those things you should at least think about.
Posted by Andrew Leon at 9:10 PM