As I've mentioned, I've been teaching a creative writing class at my younger kids' school. Some of the stories that have come out of the class have been really good. I mean, impressively good. At some point in there, I decided that I should make up a book of their stories for them. At some point right after that, I decided that I should make this book available to other people. Ostensibly, this is just a fundraiser for the school, and it is. Profits from the sale of the physical book will go to the school, making it a fundraiser.

However, it's more than that to me. Some of these kids are really good, my son being one of them. When he won that contest for his story "Into the Trench," it really made an impression on him. No, it wasn't a huge contest, but it was against adults, and he was, in his own laid-back style, elated. It came up a few weeks ago on a walking field trip (because several of the boys in his class were telling me about the books they are now working on (because they've been inspired to write books because I've been reading my book, The House on the Corner, in their class (which is all kinds of cool -- them being inspired, not me reading))), and he really stressed the part about how he won in a contest against adults (and the prize money funded a Lego purchase). All of that to say, I want to make an impression on all of the kids from this class by being able to hand them a book that they wrote.

And, like I said, some of them are really good.

At this point, what I really want to do is talk about the stories I like the most, but I don't want to predispose any of you to any particular story. Instead, I'll talk about my own representation within the pages of 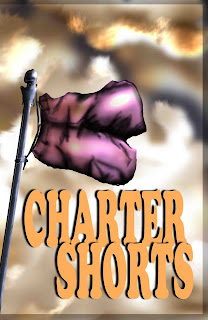 (And, yes, that is the very talented Rusty Webb on cover duty, once again.)
Well, I'll also talk a bit about the structure of the book, but only a bit, because that's all in the book. Almost the first thing we did, though, was do a bunch of 2nd person perspective stories. I figured they should have some familiarity with it, since they gave me blank stares when I asked about it, so I threw them in the water and told them to swim. Okay, actually, I brought them an example I wrote and told them to go to it. My example is in  there along with the stories they wrote for me. That's section one.

The other thing we did that we spent a lot of time on was working on plot. Talking with them about plot and the stages of plot development is what caused the Tib stories to grow into something real. Some of you may remember back to when I was posting those every couple of weeks... Well, I was posting them in relation to working on them for this class as examples of how you develop a plot. Starting with exposition. Yes, I did start there. I don't believe in skipping it just because publishers these days have decided to turn the story arc into a story slide by cutting the exposition and as much of the rising action as possible. We spent a while working on introducing the protagonist, establishing the setting, and introducing the conflict. [And, I have to say, there are some really great examples of exposition in that section (section three) of the book.]

Several of you mentioned after this post about my daughter and how she should, maybe, be a writer. Well, as it turns out, she's quite good (I did already know this). On her STAR test last year, she scored 100% on the writing section. That's fairly uncommon. My younger son, who scored nearly 100% on the entire test, lost points only in the writing section (although, it wasn't very many). Even though she wasn't in the creative writing class (not being in middle school yet), I included a story she wrote this year. Yeah, I get to do that because I'm her dad. Also, I'm the editor of the book, so I still get to do it. Really, though, it's because I just love the story and, especially, hearing her read it. She's super excited to have her story in Charter Shorts and is already hounding me for a copy. heh And I apologize that you guys can't hear her read it, but, maybe, that will change.

So, yeah, here is why you should rush out and buy Charter Shorts:
A. It's another great cover by  the inestimable Rusty Webb!
B. There are a bunch of great stories in it by literary minded middle schoolers.
C. You want to support said literary minded middle schoolers.
D. There's no telling which of these students could one day be a best selling novelist, and you want to own a copy of their very first work to sell on eBay for megabucks when they do.

E. Oh, yeah, Shadowspinner. Five whole chapters!
F. And, okay, yeah, I have to say it, my son has some stuff in there, and, well, he's just really good. His award winning story is included, and that's not even the best of his of what's included by him.

As per usual, it's available for the Kindle, and it will be available as a physical book as soon as CreateSpace allows me to make it available (and why that's not yet available is a (short) story all by itself that I don't have time to get into). I'd strongly urge the purchase of the physical book, because that's what helps out the school, but, really, anything is good. If you do want a physical copy, it's possible that I might even be able to arrange some autographs. Probably not of all of the kids, but some of them, at least.

[Edit: The physical book is now available through CreateSpace here for the low, low price of just $9.99! Really, it's worth it!]

A few other notes:
1. The link to "The Evil That Men Do" is over there on the side. That's the back story, so to speak, for Tib. It's actually just a story that became the basis for Tib, so it doesn't read like a prologue even though that's kind of what it is.
2. It would be really great if you could stop by Amazon and Goodreads and click on things like the "like" button, especially if you read and liked any of the books.
3. I'll get all the links posted for Charter Shorts as soon as they're available, including getting it added to Goodreads.

Thanks, Everyone! I really do appreciate all of you that stop by to read my ramblings, and I appreciate it even more when you take the time to listen to me plug a project!
Posted by Andrew Leon at 11:33 AM

Email ThisBlogThis!Share to TwitterShare to FacebookShare to Pinterest
Labels: Charter Shorts, creative writing, Goodreads, middle school, Shadowspinner, The Evil That Men Do, The House on the Corner, Tib, Tiberius